The Bold and the Beautiful Spoilers: Flo and Wyatt’s Bond Brings Phoebe Heartbreak – Threat To Steffy’s Adoption Gets Worse? 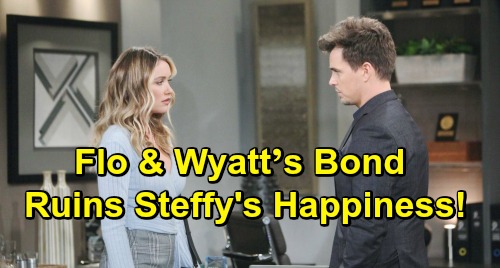 The Bold and the Beautiful (B&B) spoilers tease that Wyatt Spencer (Darin Brooks) will strengthen his bond with Florence “Flo” Fulton (Katrina Bowden). B&B fans know Flo is constantly on edge over the baby swap and illegal adoption. She’ll nearly leave town later this week but Wyatt will convince her to stick around. Of course, that could be important thanks to looming issues for Wyatt and Sally Spectra (Courtney Hope).

Quinn Forrester’s (Rena Sofer) affection for Flo will leave Sally feeling bummed and left out. She thought she’d earned Quinn’s approval, but it’ll feel meaningless compared to the adoration Quinn shows for Flo. Next, Sally will stun Wyatt with some news about her career. She’ll reveal that she’s mulling over an offer to stick around at Forrester Creations, so Wyatt will be disappointed.

As Sally potentially derails their professional future, will she derail their romance as well? Whether Sally’s to blame or not, Flo and Wyatt will continue to grow closer. Sally may see the spark and decide to break up with Wyatt, but cheating is always an option. Regardless, B&B made Flo and Wyatt former flames for a reason. It seems likely that this love triangle will result in them getting together.

However, Flo’s secret is a huge deal and will certainly affect how this relationship plays out. There’ll inevitably be other instances where Flo considers bailing while she still can. Wyatt will naturally keep talking Flo off the ledge, so he’ll be the one keeping the biggest threat to Steffy Forrester’s (Jacqueline MacInnes Wood) happiness around.

Dr. Reese Buckingham (Wayne Brady) and Zoe Buckingham (Kiara Barnes) also know the truth, but they’re much more likely to keep quiet. Flo’s the one who’s getting chummy with Hope Spencer (Annika Noelle) and making the guilt unbearable. The Bold and the Beautiful spoilers say that trend will continue, so there’ll be plenty more confession opportunities. There’ll also be chances for Flo to simply get caught – perhaps by Wyatt.

Wyatt might keep the secret for Flo if he’s madly in love with her by then. It would mean hurting Hope, but the alternative is hurting Steffy. Wyatt cares about them both, so protecting Flo and Steffy might win out. That’s especially true if Hope’s found joy again. She seems to be on the verge of it now that Douglas Forrester (Henry Joseph Samiri) and Thomas Forrester (Matthew Atkinson) are in town.

Still, Flo’s presence in Los Angeles will be a major problem for Steffy, even while she’s in Paris. Steffy has no idea that this phony birth mom could derail everything in an instant! Flo could make quite a mess before or after Steffy makes her B&B comeback.