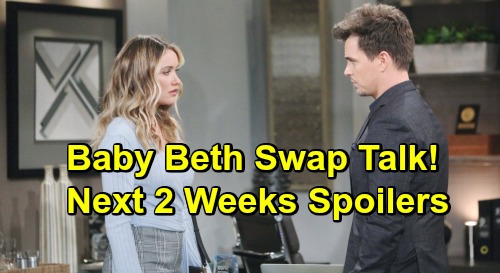 The Bold and the Beautiful (B&B) spoilers for the next two weeks tease that we’ll see some fierce faceoffs as well as some tender moments. During the week of March 25-29, Brooke Forrester (Katherine Kelly Lang) will spar with Dr. Taylor Hayes (Hunter Tylo). Since Taylor recently locked lips with Ridge Forrester (Thorsten Kaye), Brooke will insist that he’s off-limits. She’ll end up provoking Taylor into a physical fight.

Ridge will urge the ladies to cool it, but Brooke will remain agitated. She’ll believe him when he promises the kiss meant nothing, but she’ll still feel like Taylor should back off. Later, Ridge will talk about Taylor’s desire to see Hope Spencer (Annika Noelle) with Thomas Forrester (Matthew Atkinson). He’ll mention that conversation to Brooke and leave her infuriated. 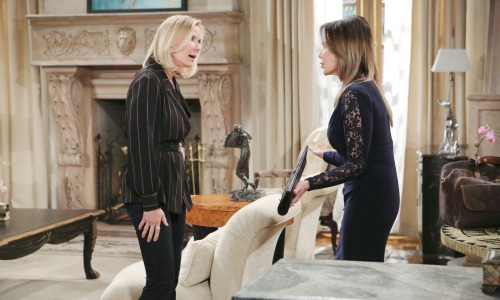 Brooke will be appalled with Taylor for her matchmaking goal, especially since Thomas is grieving. He wasn’t a couple with Caroline Spencer (Linsey Godfrey) at the time of her death, but he’s still mourning along with Douglas Forrester (Henry Joseph Samiri). Caroline was the mother of Thomas’ child and a good friend, so Brooke will think Taylor’s suggestion is inappropriate.

Of course, Brooke will think it’s even more inappropriate for Taylor to set up a married woman! She’ll argue that Hope is taken, but that won’t stop Taylor from doing whatever she wants. Meanwhile, Wyatt Spencer (Darin Brooks) will check in with Liam Spencer (Scott Clifton) and wonder how he’s doing. As these brothers bond, Wyatt will want to know when Liam’s going to get his life back on track.

Liam may suggest that he’s trying, but overcoming the loss of Beth Spencer and reconnecting with Hope are tough tasks. The Bold and the Beautiful spoilers say Hope will dismiss Liam’s idea this week. He’ll try to plan their future, but Hope will struggle to think beyond the here and now. 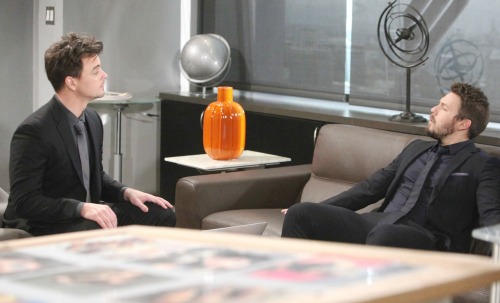 B&B fans can also expect a close call. Florence “Flo” Fulton (Katrina Bowden) will be determined to get the baby swap secret off her chest. She trusts Wyatt and still has some lingering feelings for him, so she’ll think he’s a good person to confide in. Flo will pop in Wyatt’s office to divulge this shocker, but it seems she’ll back out at the last second.

Other Bold and the Beautiful spoilers state that Quinn Forrester (Rena Sofer) will get chummy with Flo. She’ll make it clear that she likes Flo better than Sally Spectra (Courtney Hope), so Wyatt will make his mom apologize. Later, Ridge will try to convince Sally that she’s better off staying at Forrester Creations. It’ll lead to trouble when Sally admits the enticing offer to Wyatt.

Ridge’s generous package will leave Sally questioning her decision to partner with Bill Spencer (Don Diamont). Wyatt will be frustrated when he realizes Sally may walk away. During the week of April 1-5, we’ll see frustration for Brooke as well. She’ll bring up her complex history Taylor and accuse her rival of using Steffy Forrester (Jacqueline MacInnes Wood) as a revenge pawn.

Over with Bill and Katie Logan (Heather Tom), The Bold and the Beautiful spoilers say they’ll play detective for a bit. Katie and Bill will hope to discover who’s been setting them up. It probably won’t be long until the clues point to Donna Logan (Jennifer Gareis) and Justin Barber (Aaron D. Spears), but this will be more about curiosity than scolding. Bill and Katie have actually been enjoying Cupid’s arrows.