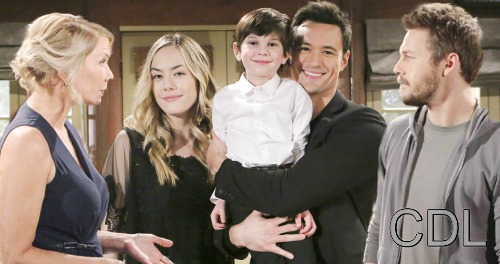 The Bold and the Beautiful spoilers tease that Liam Spencer (Scott Clifton) will soon get a stern warning. He and Hope Spencer (Annika Noelle) have really been struggling lately to move on after the death of their daughter Beth Spencer, and Hope especially has had difficulty finding renewed joy in life after the tragedy.

But Hope has found a couple of outlets for happiness. She started bonding with “Phoebe Forrester” (Isabella de Armas and Redford Prindiville), and then she began to connect with little Douglas Forrester (Henry David Samiri). And now that Steffy Forrester (Jacqueline MacInnes Wood) has taken Phoebe to Paris for a while, Hope’s attention has largely turned toward playing a mothering role to Douglas.

Taylor would like nothing more than for Hope to continue gravitating toward Douglas, and in turn get closer to Thomas Forrester (Matthew Atkinson). Taylor voiced this opinion to Ridge Forrester (Thorsten Kaye), who in turn relayed the opinion to Brooke Forrester (Katherine Kelly Lang). And needless to say, Brooke wasn’t happy to hear about Taylor’s wish because if it ever came to fruition, it would mean the end of Hope and Liam’s marriage.

According to The Bold and the Beautiful spoilers, Brooke will decide to nip Taylor’s little plot in the bud and go have a talk with Liam directly. She’ll figure that if she can get Liam to see that Taylor is going to be vying behind the scenes to push Thomas and Hope together, then he can fight against that plot and keep an eye on any goings-on between Hope and Thomas.

So, Brooke will sit Liam down for a little chat and fill him in on what Taylor observed between Hope and Douglas, and about Taylor’s plot to get Hope and Thomas together. Chances are, she’ll expect Liam to be outraged and horrified by Taylor’s dream to revive “Steam” and stick Hope with Thomas. And Brooke will want Liam to understand the forces that are going to be working against his marriage in the near future.

But according to B&B spoilers, Liam will have a rather cool reaction to the whole thing. He’ll brush aside Brooke’s concerns and argue that he and Hope may be in a difficult place right now, but certainly nether of them would stray in the way Taylor is predicting. He’ll probably tell Brooke that he appreciates her concern, but all is good with his marriage and there’s no reason to fear a “Thope” pairing.

Besides, Liam just doesn’t have a reason – aside from Brooke’s concern over something that Taylor observed – to think that Thomas is any sort of threat to his marriage. He doesn’t appreciate the power of Taylor’s observation and desires like Brooke does, so it looks like Brooke’s stern warning will largely be lost on Liam as he brushes her concerns aside.

But The Bold and the Beautiful spoilers indicate that Brooke may indeed have reason to be gravely concerned, and this will likely become clearer to her as she watches her daughter’s behavior over the coming weeks. Thomas and Hope will get closer, as they rely on each other for support in the wake of their respective tragedies and bond as they take care of Douglas.

Do you think that Brooke is right to be so concerned about Hope and Liam’s marriage? Stay tuned to the CBS soap and don’t forget to check CDL often for the latest Bold and the Beautiful spoilers, updates, and news.