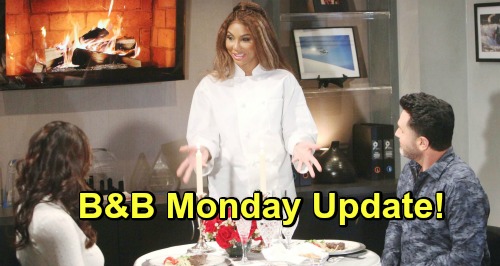 The Bold and the Beautiful spoilers update for Monday, April 1, tease that Bill Spencer (Don Diamont) and Katie Logan (Heather Tom) will decide to do some sleuthing. They’ve just enjoyed a spectacular dinner courtesy of their secret matchmaker, and they’re wanting to know who to thank for his or her generosity. The secret matchmaker seems to know a lot about both Bill and Katie, so it’s clearly someone close to them.

Bill and Katie will naturally suspect Justin Barber (Aaron D. Spears) and Donna Logan (Jennifer Gareis), since both of them have made it clear that they’re on “Team Batie.” But Justin and Donna have been pretty overt in their actions in the past, so Bill and Katie will probably decide that it’s not them.

But if Bill and Katie really think about it, they’ll realize that there’s another person who would really love to see them together, and that’s their son Will Spencer (Finnegan George). Sure, Will’s just a little kid, but he’s pretty savvy, and he’d really like to see his mom and dad back together. The Bold and the Beautiful spoilers indicate that the secret matchmaker will indeed be Will.

Meanwhile, on the new episode of B&B on Monday, April 1, Brooke Forrester (Katherine Kelly Lang) and Taylor Hayes (Hunter Tylo) will get into it again. Brooke is about to learn from Ridge Forrester (Thorsten Kaye) that Taylor is hoping that Hope Spencer (Annika Noelle) will eventually pair up with Thomas Forrester (Matthew Atkinson), which would free up Liam Spencer (Scott Clifton) for Steffy Forrester (Jacqueline MacInnes Wood).

Of course, this revelation will infuriate Brooke, who just wants Taylor to stop scheming and interfering in their daughters’ lives. Brooke is fiercely protective of Hope, who has recently experienced the devastating loss of her daughter. The last thing that Brooke wants is for Hope to lose her husband, too.

Shortly after learning about Taylor’s wishes, Brooke will encounter Taylor, and the two will argue. According to The Bold and the Beautiful spoilers, the argument will swiftly move from a discussion of their daughters to a discussion of Brooke and Taylor’s decades-long feud. Brooke will accuse Taylor of using their daughters to continue their rivalry, and of course Taylor will be disgusted by the accusation.