BY Heather Hughes on April 1, 2019 | Comments: one comment
Related : Soap Opera, Spoiler, Television, The Bold and the Beautiful 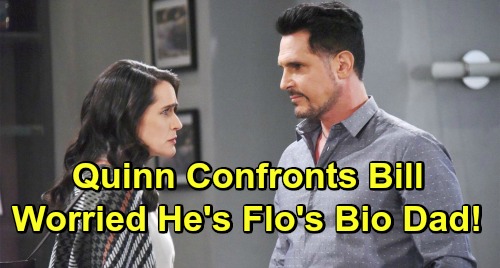 The Bold and the Beautiful (B&B) spoilers tease that Quinn Forrester (Rena Sofer) will do some digging. She’ll grow increasingly curious about Florence “Flo” Fulton’s (Katrina Bowden) father and why Shauna Fulton (Denise Richards) is staying so tight-lipped about him. Quinn will quickly realize there’s something strange going on, so she’ll try to get to the bottom of all this.

During the week of April 8-12, Quinn’s search will lead her to someone surprising. The Bold and the Beautiful spoilers say Quinn will corner Bill and demand answers about his history with Shauna. This is a huge deal since Quinn believes Flo is Wyatt Spencer’s (Darin Brooks) perfect match. They’re obviously not such a good match after all if they’re siblings!

If Bill is Flo’s biological father, that would make Wyatt her half-brother. Not only would it be weird since they dated and did who knows what back in high school, it would also eliminate Wyatt’s current love triangle. Sally Spectra (Courtney Hope) would certainly be happy about the sibling shocker, but it wouldn’t be a smart move on B&B’s part.

“Wally” needs obstacles otherwise we’re never going to see them. A content couple tends to be an offscreen couple, so Sally and Wyatt could use the drama. Besides, this is how you have a romance to root for. Couples have to overcome things, so cutting out the competition would be an odd choice. Wyatt needs to pick Sally because he loves her, not because Flo happens to be his sister.

With that in mind, Quinn may have the wrong idea. Just because Bill and Shauna might’ve had a fling in the past doesn’t mean they conceived Flo together. Shauna is apparently a bit of a free spirit who was wild in her younger years. She likely had lots of hookups, including another one on canvas.

The Bold and the Beautiful spoilers say Shauna will be stunned to learn Quinn’s married to Eric Forrester (John McCook). That suggests she knows who Eric is and has a reason to be shocked. There’s also some buzz in the soap world about a daytime drama patriarch getting a long-lost child. All of that lines up with Eric being Flo’s father, so it may just take Quinn a few steps to get there.

Nevertheless, Quinn should be awfully nervous when she realizes there’s a chance Bill is Flo’s dad! We’ll give you updates as other B&B news comes in. Stick with the CBS soap and don’t forget to check CDL often for the latest Bold and the Beautiful spoilers, updates, and news.