The Bold and the Beautiful Spoilers: Flo Is a Forrester! – Eric’s Her Father – Shocker Brings Bigger Baby Swap Drama 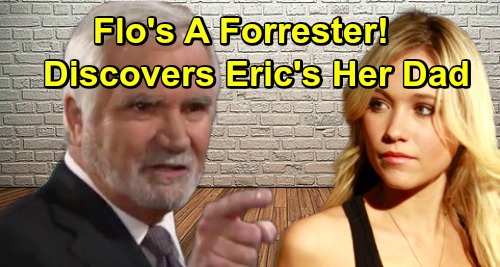 The Bold and the Beautiful (B&B) spoilers tease that Florence “Flo” Fulton’s (Katrina Bowden) father will eventually be revealed. The identify of her dad remains a mystery, but several huge clues are already emerging. For starters, we’ve got Quinn Forrester’s (Rena Sofer) interest in the situation.

Quinn will become quite connected to this storyline – perhaps in ways she never expected! She recently told Flo that she thought her life would change for the better if she knew her father was. Quinn can’t seem to understand why her mom, Shauna Fulton (Denise Richards), would leave Flo out of the loop permanently.

Flo and Quinn also chatted about Bill Spencer (Don Diamont) being a billionaire. B&B dropped hints about Flo not thinking something that crazy would happen again, which means it obviously will. Flo’s father is obviously going to be quite rich.

There’s some buzz in the soap world about one show’s patriarch getting a long-lost child. We also know Shauna will be floored to learn Quinn is married to Eric Forrester (John McCook). There’s no confirmation just yet, but all the signs point to Eric being Flo’s biological father.

Of course, this could create some interesting drama all around. For starters, it would bring an instant rivalry for old besties Quinn and Shauna. You can bet Quinn would be territorial and might even up driving Shauna right back into Eric’s arms. She’d at least worry they would bond over their daughter together.

After all, Will Spencer (Finnegan George) is pretty much the reason Bill started inching back toward Katie Logan (Heather Tom). Children can create a powerful connection, so Quinn would be concerned. However, the truly intriguing part here is that Flo would be a Forrester! She’d be related to Steffy Forrester (Jacqueline MacInnes Wood), the woman who adopted the baby she supposedly gave birth to.

This could lead to a whole new level of risk. Eric would undoubtedly want to welcome Flo to the Forrester clan. After Steffy’s comeback, she’d want to get to know Flo a bit better, too. The Bold and the Beautiful spoilers say Flo could be more torn than ever. She would still hate lying to Hope Spencer (Annika Noelle), but how could she come clean and turn her new family against her?

Shauna will ultimately help Flo keep her secret, so that also lines up with Eric being the long-lost “baby daddy.” It’d give Shauna even more of a motive to protect her daughter, especially if she still wants a shot with her former flame. B&B fans can expect some exciting developments as the pressure revs up and secrets start to shatter.