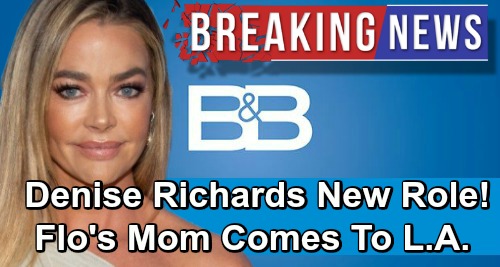 The Bold and the Beautiful spoilers has some exciting casting news to pass on about an important new B&B character. CBS has announced that Denise Richards is joining the cast of B&B for a contract role! The actress will soon be appearing in the role of Shauna Fulton, Florence “Flo” Fulton’s (Katrina Bowden) mother.

But in actuality, Phoebe is Beth Spencer, who was stolen from Hope Spencer (Annika Noelle) and Liam Spencer (Scott Clifton) right after her birth.

It seems that Denise Richard’s character Shauna Fulton will join her daughter in Los Angeles because of the trouble that Flo’s in. According to People Magazine, Shauna is described as “a fun-loving, hard-working single mother from Las Vegas who aspires to live life to its fullest.”

“Shauna heads for Los Angeles when she learns that her daughter, the pride and joy of her life, is entangled in a complicated situation. However, Shauna’s involvement won’t stop there. She’s got a past and big secrets to spill.”

One has to wonder whether Shauna will eventually be a love interest for one of the leading B&B men. Bill Spencer (Don Diamont) seems like a good option, although he seems to be re-interested in Katie Forrester (Heather Tom) at the moment. But you never know…Shauna could easily catch Bill’s eye somewhere along the way.

Whatever the case, it will be great to see Denise on B&B. It looks like she will be doing double duty on B&B and The Real Housewives of Beverly Hills for the near future. Denise just recently joined Real Housewives season 9, and we know that her role on B&B is a contract role, so she’ll be on the B&B scene for quite a while.

Denise’s first airdate on B&B is Wednesday, April 3 and she starts filming this Friday, February 22. Will you be watching? Stay tuned to the CBS soap and don’t forget to check CDL often for the latest Bold and the Beautiful spoilers, updates, and news.