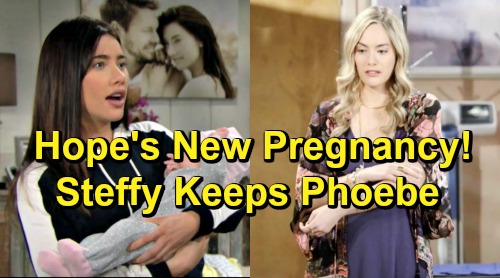 The Bold and the Beautiful (B&B) spoilers tease that Hope Spencer (Annika Noelle) will do her best to push Liam Spencer (Scott Clifton) and Steffy Forrester (Jacqueline MacInnes Wood) back together. She feels guilty for denying Kelly Spencer (Zoe Pennington and Chloe Teperman) the chance to have a live-in dad. Hope believes Liam would love being a united family with Steffy and the girls as well.

B&B fans can expect plenty of conflict on new B&B episodes next week, February 25-March 1. The Bold and the Beautiful spoilers say Liam will try to save his marriage, but Hope may be stubborn. This isn’t the first time she’s had doubts about her relationship anyway. Hope’s always been a bit insecure about Steffy and Liam’s lingering bond. Now that there are two precious children in the mix, Hope knows the right thing to do.

At least Hope knows what she thinks is the right thing! In reality, grief is clouding her judgment. Of course, Dr. Reese Buckingham’s (Wayne Brady) plot is the real problem. This wouldn’t be an issue if Liam and Hope still had their daughter with them. The loss of Beth Spencer set Hope up for intense mourning and the guilt that would ultimately lead to this.

Nevertheless, the scheme won’t be brought to light anytime soon. It’s possible Hope will back out of her divorce idea, but it makes more sense for her to stick with it. The more fallout B&B can offer, the bigger the backlash will be when Reese’s plan blows up.

If Liam indeed reunites with Steffy, where does that leave Hope? The answer is probably single and even more distraught. However, Hope could find someone to move on with sooner or later. If Thomas Forrester (Matthew Atkinson) returns and sweeps Sally Spectra (Courtney Hope) off her feet again, that could leave Wyatt Spencer (Darin Brooks) brokenhearted and available.

That’d be the perfect combo for Hope, who’ll be just as devastated. Then again, B&B might push Hope in someone else’s direction. Regardless, it might be interesting if a hookup leads to another shocking pregnancy. Could that affect Hope’s decision regarding Beth in the end?

On soaps, it’s not unheard of for people to let other characters raise their children. Everyone expects Hope to take Beth back, but it may not be quite that simple. This secret could come out way down the line.

“Phoebe Forrester” (Isabella de Armas and Redford Prindiville) will certainly grow more and more attached to Mama Steffy as time goes on. It could cause emotional distress to rip Beth from her arms. Hope may want to put the needs of her daughter first. Could she make the brutal decision to let Steffy keep raising Beth as her own? Could they actually make the adoption legal?

If Hope’s got another bun in the oven by then, it might soften the blow. Plus, it’d make for some messy family connections and complications. It’s tough to believe Hope will be able to give up Beth for good, even after a successful pregnancy, but B&B doesn’t always let characters behave logically. Sometimes plot comes first, so we can’t rule anything out.