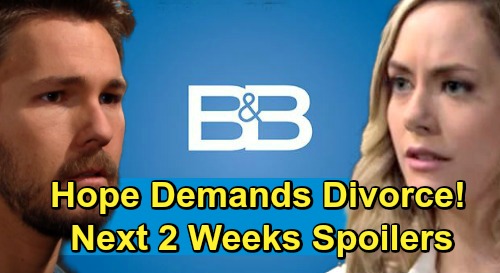 The Bold and the Beautiful (B&B) spoilers for the next two weeks tease that secrets will take center stage. During the week of February 18-22, Justin Barber (Aaron D. Spears) will summon Donna Logan (Jennifer Gareis) for a secret meeting. He’ll want to talk about Bill Spencer (Don Diamont), Katie Forrester (Heather Tom) and their potential future together.

Donna and Justin will form a plan to reunite “Batie.” They’ll feel like Katie and Bill are good for each other, so they’ll play Cupid and hope they can bring the exes some happiness. Elsewhere, Bill will make a promise to Katie and Will Spencer (Finnegan George). He’ll let them know he’s there for them and always will be. Since Thorne Forrester (Ingo Rademacher) abruptly left town, Bill will want to step up.

Meanwhile, Wyatt Spencer (Darin Brooks) will mull over an enticing offer. He’ll tell Sally Spectra (Courtney Hope) about Bill’s attempt to lure him back to the family business. Wyatt’s news will leave Sally wary of Bill’s manipulation, but she won’t push Wyatt to turn him down. She’ll just want her beau to trust his gut on this. If Wyatt believes it’s a good move, Sally will be OK with his choice.

Sally will also learn Wyatt’s making a demand as part of the package. He’ll tell her that if he returns to Spencer Publications, then Spectra Fashions will be revived. Sally will certainly like the sound of that! Once Wyatt accepts the offer and this becomes a done deal, Sally get roll up her sleeves and get back in the fashion house game.

Other Bold and the Beautiful spoilers say Zoe Buckingham (Kiara Barnes) will shock Steffy Forrester (Jacqueline MacInnes Wood). She’ll march over to her house and insist that they need to talk about Hope Spencer’s (Annika Noelle) baby. B&B fans can expect Zoe to be fired up!

Hope won’t think that’s what she’s doing exactly. She’ll feel like it’s important for Liam to support Steffy, Kelly Spencer (Zoe Pennington and Chloe Teperman) and “Phoebe Forrester” (Isabella de Armas and Redford Prindiville). Hope’s fixation on “Phoebe” will transfer to Liam and his role in her life, so Steffy and Liam will grow increasingly concerned.

During the week of February 25-March 1, Liam will be forced to fight for his relationship. It looks like Hope will push for a divorce, so Liam will have to work hard if he wants to keep his marriage intact. Hope clearly doesn’t have the confidence or energy to put forth much effort right now.

On the bright side, Wyatt’s relationship will be stronger than ever. We mentioned the revival of Spectra Fashions, which will be all thanks to Wyatt. The Bold and the Beautiful spoilers say Sally will be grateful as the company gets up and running again. Wyatt and Sally will come together for their own celebration, so that probably just means lots of flirting and bedroom fun.

It sounds like the next two weeks will bring some great episodes. We’ll give you updates as other B&B details emerge. Stay tuned to the CBS soap and don’t forget check CDL often for the Bold and the Beautiful spoilers, updates and news.