BY Heather Hughes on February 18, 2019 | Comments: one comment
Related : Soap Opera, Spoiler, Television, The Bold and the Beautiful 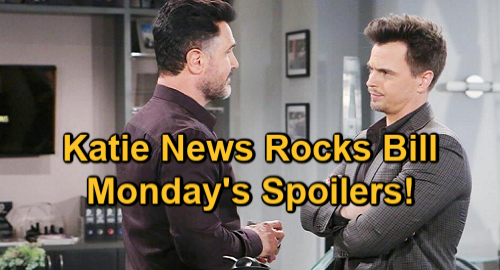 Bill will grow concerned about Katie as well as Will Spencer (Finnegan George). He’ll realize he may need to take on a bigger role in their lives. This could be the first step toward a “Batie” reunion, but Katie will lick her wounds the time being. She’ll feel a bit better after she opens up during a chat with Donna Logan (Jennifer Gareis) and Brooke Forrester (Katherine Kelly Lang).

Of course, Zoe’s giving Reese a chance to come forward first. If he doesn’t cooperate, Zoe plans to share the info herself. She’ll suggest that it’s Reese’s choice, but he’ll push her to take the third option. Reese will want Zoe to let this go and pretend she never learned Beth Spencer was alive. He’ll plead with Zoe and insist the truth would cause too much damage.

Reese will point out that spilling this secret would have major ramifications. He’ll contend that he’d land behind bars and so would Florence “Flo” Fulton.

Zoe may think they should’ve thought about that before they stole a baby! However, part of Zoe will hate to see her father locked up. She loves Reese even though she doesn’t like him much right now. Reese might add that Steffy Forrester (Jacqueline MacInnes Wood) has already fallen in love with “Phoebe Forrester” (Isabella de Armas and Redford Prindiville).

He may contend that there’s no positive outcome here. They’d just be trading one mom’s pain for another. Nevertheless, Zoe won’t think it’s the same thing. Hope believes her child is dead and that’s just not OK. Before Zoe storms out, Reese will want the heads-up on what she’s going to do. He won’t be divulging anything, so it’ll be Zoe’s decision.

Zoe will admit she’s not sure she can keep quiet now that she knows the real story. The Bold and the Beautiful spoilers say Zoe will leave Reese to fret about the possibility of jail time. He’ll just have to hope Zoe comes through for him in the end.

B&B spoilers state that Zoe will give Reese quite a scare soon, but it looks like it’ll be a false alarm. There are more twists and turns left in this hot plot, so Zoe can’t confess just yet!

The walls are closing in this week on #BoldandBeautiful. Don’t miss it! pic.twitter.com/qQSf48pr18