The Bold and the Beautiful Spoilers: Phoebe Obsession Drives Hope and Liam Towards Divorce – Steffy Caught in the Middle

BY Kinsley Goldman on February 17, 2019 | Comments: one comment
Related : Soap Opera, Spoiler, Television, The Bold and the Beautiful 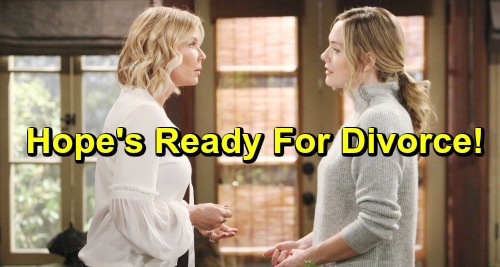 The Bold and the Beautiful (B&B) spoilers tease that familiar concerns will rev up for Steffy Forrester (Jacqueline MacInnes Wood). During the week of February 18-22, Steffy will fret about Hope Spencer’s (Annika Noelle) growing attachment to her adopted baby. It’s clear that Hope can’t get enough of “Phoebe Forrester” (Isabella de Armas and Redford Prindiville), but Steffy just doesn’t think it’s healthy.

Steffy was already worried about Hope’s obsession, but it’ll become more apparent than ever. She’ll feel like it’s time to intervene, so she’ll have a little chat with Liam Spencer (Scott Clifton). The Bold and the Beautiful spoilers say Steffy will once again voice that it’s a problem. She’ll want Liam to see why this isn’t good for Hope, so she’ll rehash how Hope can’t replace Beth Spencer with “Phoebe.”

Liam heard Steffy out last time, but he hated to take away the one thing that helped Hope. These visits with “Phoebe” aren’t a long-term solution, but they’re providing some short-term relief. However, Steffy will wonder where they draw the line. At some point, short-term will become long-term if they don’t step in and help Hope understand what she’s doing.

Hope’s “Phoebe” obsession won’t just be for herself either. She’ll be so consumed with thoughts of “Phoebe” that she pushes Liam to spend more time with her, too. Hope will feel like Liam needs to be there for “Phoebe” like he’s been there for Kelly Spencer (Zoe Pennington and Chloe Teperman). She’ll start pressuring Liam to hang out with Steffy and the girls as much as possible.

It sounds like Steffy and Liam will have a bit of an intervention. They may sit Hope down and suggest that maybe she should dial down her “Phoebe” fixation. Liam and Steffy may enforce a gentle baby ban until Hope’s heart as truly healed.

The Bold and the Beautiful spoilers say they’ll want Hope to focus on her own future, but she may take that suggestion too far. Hope will end up suggesting a divorce to Liam soon enough. The B&B shocker will really throw Liam for a loop.

Liam will realize this “Phoebe” obsession is driving them apart, but he’ll hope their marriage can be salvaged. This devoted husband will do whatever he can to save his relationship and help spiraling Hope. We’ll give you updates as other B&B news comes in. Stay tuned to the CBS soap and don’t forget to check CDL often for the latest Bold and the Beautiful spoilers, updates and news.