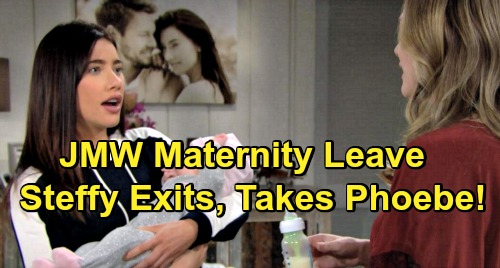 The Bold and the Beautiful (B&B) spoilers tease that Jacqueline MacInnes Wood (Steffy Forrester) has a baby on the way, which means the show will have to prepare for her absence on screen. She’ll be taking her maternity leave at some point, so B&B will need an explanation for her temporary exit. Steffy can come back for more drama after the birth of her child and some recovery time at home.

Of course, The Bold and the Beautiful fans know Steffy’s part of a huge story right now. She’s playing a crucial role in the “Phoebe Forrester” (Isabella de Armas and Redford Prindiville) chaos, so her departure presents a challenge. However, it’s nothing B&B can’t handle!

There are several ways they could explain writing Steffy out for a while. It all depends on which direction they want to go in. It’s possible the truth about “Phoebe” will explode before Steffy’s exit, but we doubt it.

Baby swap storylines are notoriously slow. They often take many, many months to play out, just as Scott Clifton indicated in an interview that this one will. Hope Spencer (Annika Noelle) just gave birth in January, so having the secret come out this fast would be unheard of. Fans are eager to see Hope reunited with her child, but it’s tough to believe that’ll happen just yet.

This kind of thing is big enough that it needs to come out during a sweeps period. If it comes out during February sweeps, where’s the real drama? Steffy loves “Phoebe,” but it’s not going to be a huge deal if she gives her back at this point. No one would feel very sorry for her. There would no real payoff at all for this storyline. It would make it a giant waste of time and an epic failure.

May sweeps, on the other hand? That’s a massive deal! That’s a crushing blow to Steffy’s heart and full-blown fury for Hope, who will have been deprived of her daughter’s first precious months. The Bold and the Beautiful could let it go on even longer than that if they wanted to. It may not be fun waiting, but at least it means a more satisfying conclusion to this hot plot.

That brings us back to Wood’s maternity leave. It makes sense that Steffy will be off canvas with the girls for a while and return for the end of the story later. The Bold and the Beautiful spoilers suggest that some other stories may move to the front in the meantime, so there’ll be plenty of material to keep viewers interested.

Whatever the case, B&B will have to drop the baby bomb eventually. Fans will want to stay tuned for all that craziness! We’ll give you updates as other news comes in. Stick with the CBS soap and don’t forget to check CDL often for the latest Bold and the Beautiful spoilers, updates and news.