BY Kinsley Goldman on February 16, 2019 | Comments: one comment
Related : Soap Opera, Spoiler, Television, The Bold and the Beautiful 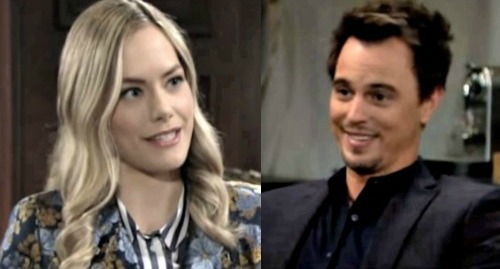 The Bold and the Beautiful (B&B) spoilers tease that Thomas Forrester will return to town in the form of Matthew Atkinson (ex-Austin Travers on The Young and the Restless). Naturally, that could stir up serious issues in Sally Spectra’s (Courtney Hope) romance with Wyatt Spencer (Darin Brooks). These two are solid right now, but what happens when Sally’s original prince charming comes back around?

Sally got burned big time thanks to Thomas, so she may fight her feelings at first. He swept her off her feet only to reunite with his ex, Caroline Spencer (Linsey Godfrey). Of course, Godfrey is busy playing Sarah Horton over on Days of Our Lives. B&B doesn’t seem to have any Caroline recast plans either, so Thomas should be single and ready to put his heart out there again when he returns.

Perhaps Thomas’ dream reunion wasn’t quite the dream he thought it’d be! He wanted to be a family with Caroline and their young son, Douglas Forrester, but things apparently just didn’t work out. Their issues will probably keep building until they just can’t take it anymore.

Thomas may ultimately realize he made a huge mistake by tossing away his romance with Sally, but will she accept his apology? Forgiveness could be the first step toward getting back together, so Thomas may work on that right off the bat. He might pour his heart out to Sally and hope she can get past how he treated her. From there, Thomas can try to steal Sally’s heart once again.

If Thomas succeeds, that could result in serious sorrow for Wyatt. He’s all in on his future with Sally, so what happens if she dumps him for her ex? Wyatt could find himself broken, lonely and in need of comfort. Meanwhile, Hope Spencer (Annika Noelle) could be feeling the exact same way after her inevitable split from Liam Spencer (Scott Clifton). Will Wyatt end up turning to a former flame as well?

Many Hope and Wyatt fans have been rooting for them to reunite. Noelle’s version seems to have some good chemistry with Brooks on screen, so B&B might as well go for it. The Bold and the Beautiful could bring them together while Liam lands back in Steffy Forrester’s (Jacqueline MacInnes Wood) arms.

Hope has found a little relief in spending time with “Phoebe Forrester” (Isabella de Armas and Redford Prindiville), but what if Steffy puts a stop to it? That could sink Hope right back into the pit of despair. She may need someone she can relate to and rely on. Likewise, distraught Wyatt may find Hope’s familiar warmth soothing when he needs it most.