BY Heather Hughes on February 16, 2019 | Comments: one comment
Related : Soap Opera, Spoiler, Television, The Bold and the Beautiful 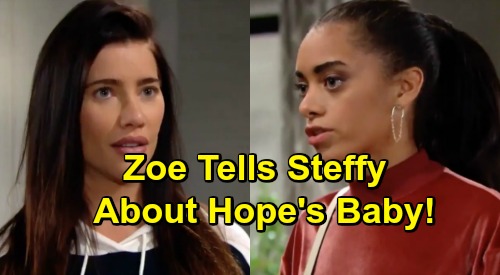 The Bold and the Beautiful (B&B) spoilers tease that Zoe Buckingham (Kiara Barnes) will face a difficult situation. She’s furious with Dr. Reese Buckingham (Wayne Brady) over his appalling baby switch scheme. Zoe can’t believe her father would orchestrate all this and leave Hope Spencer (Annika Noelle) in so much agony. Nevertheless, Reese is her dad and that means she’ll worry about his fate.

Zoe just warned Reese that if he didn’t tell Hope the truth, then she’d do it for him. She doesn’t think she can stand by and let Hope continue suffering. However, Reese will want Zoe to understand what’s at stake here. He’ll argue that if Zoe blabs, he’ll go to prison along with Florence “Flo” Fulton (Katrina Bowden).

Reese will push Zoe to stay quiet and let Steffy Forrester (Jacqueline MacInnes Wood) keep the baby. He’ll know he’s asking a lot, but he’ll really hope Zoe’s willing to do this for him. Reese will once again play the “daughter in danger” card and contend that he would’ve done anything to keep Zoe safe.

Of course, Zoe just won’t know if she can keep her mouth shut about something so huge. After she leaves Reese, he’ll fret about what Zoe’s going to do next. The Bold and the Beautiful spoilers say Flo will reenter the picture as well. She’ll want updates on Zoe’s plans, but she won’t like what she hears.

Zoe will eventually decide she has to come forward with what happened that night on Catalina Island. Instead of going to Hope, Zoe will end up turning to Steffy. She may feel like she owes Steffy an explanation first since this kid’s going to be ripped from her arms. Zoe also has her job to think about, so she’ll want to handle this as delicately as possible.

B&B’s weekly promo shows Zoe approaching Steffy and gearing up for her big announcement. Steffy will assume Zoe’s there for more than just a little chat. She’ll push Zoe to reveal the reason for this visit as she grows increasingly curious.

Zoe will declare that she’s there to talk to Steffy about Hope’s baby. Steffy will seem confused by that revelation. She’ll give a perplexed shrug and reply, “What about her?” Reese and Flo will panic over what Zoe intends to divulge, but it looks like they’re in luck. This is the perfect setup for a soapy fake-out.

Based on The Bold and the Beautiful spoilers, it appears Zoe’s declaration will be made on Tuesday. Since Steffy still has the baby later in the week and Hope remains stuck in grief, that tells us Zoe will bail on the plan. She may make up an excuse about being concerned over Hope’s return to work or something along those lines. Zoe can surely find some explanation that ties in with Beth Spencer.

Whatever the case, The Bold and the Beautiful spoilers suggest the lid will stay on this secret for now. Zoe could certainly raise suspicions though, so Reese and Flo will have to live in fear! We’ll keep you posted as other B&B news comes in. Stick with the CBS soap and don’t forget to check CDL often for the latest Bold and the Beautiful spoilers, updates, and news.