The Bold and the Beautiful Spoilers: Week of February 11 Preview [VIDEO] – Adoption Arrest Threat and a Valentine’s Day Split 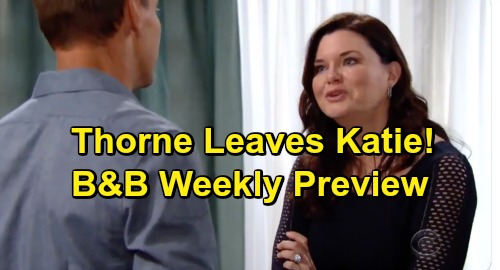 The Bold and the Beautiful (B&B) spoilers for the week of February 11-15 tease that some stunning moments are coming up. For starters, Florence “Flo” Fulton (Katrina Bowden) will give quite a performance. After spilling just a bit too much to Zoe Buckingham (Kiara Barnes), it looks like Flo will play the part of a distraught birth mom. She’ll do her best to sell the story to a suspicious Zoe.

Although Zoe will be sympathetic on some level, part of her will still feel like something isn’t right. Flo will pick up on Zoe’s doubtful vibe and worry that the whole baby scheme could fall apart. She’ll pick up the phone and try to contact Dr. Reese Buckingham (Wayne Brady) right away. Unfortunately, Reese may not be able to get back to Zoe fast enough. It won’t be long until Zoe is revving up the pressure once more.

The Bold and the Beautiful spoilers say another confrontation will hit by mid-week. Zoe just won’t be able to let this go. She’ll want some answers regarding the baby Steffy Forrester (Jacqueline MacInnes Wood) adopted, but she won’t want the same old story Flo tried to push before. Zoe will insist that she’s willing to call the cops or Steffy herself if Flo doesn’t cooperate.

B&B fans can expect Flo to have a major breakdown. It appears some of the adoption deception will finally come out, at least the part about Phoebe not being Flo’s baby. After Flo’s finished telling her latest tale, Zoe will be in shock. She’ll reach out to Reese in hopes of getting his side of the story, so things about to get even more complicated.

Over with Hope Spencer (Annika Noelle), she’ll continue to bond with “Phoebe Forrester” (Isabella de Armas and Redford Prindiville). Steffy Forrester’s (Jacqueline MacInnes Wood) joy over their connection will quickly turn to concern. She’ll wonder if Hope’s attachment to “Phoebe” is healthy, so she’ll bring up the issue to Liam Spencer (Scott Clifton).

Liam will see where Steffy’s coming from and appreciate her looking out for Hope. However, he won’t think there’s any reason to worry yet. Later, Hope will reflect on the night Beth Spencer “died.” She’ll try to remember every last detail, so there’s a chance some surprising clue could emerge.

Elsewhere, Katie Forrester (Heather Tom) will get a crazy Valentine’s Day gift. It’ll naturally be from Thorne Forrester (Ingo Rademacher) and it’ll catch her completely off guard. Thorne will express doubts about their marriage, so it’s safe to say this won’t be a pleasant present as it leaves Katie in tears. Divorce papers may be on the way soon enough.

While Katie fills Wyatt Spencer (Darin Brooks) in on her bad news, Bill Spencer (Don Diamont) will open up to Justin Barber (Aaron D. Spears). The Bold and the Beautiful spoilers say Bill will decide he wants his family back, so Katie probably won’t be single for long. It sounds like Bill and Katie’s reunion is already in the works!

B&B viewers can expect some great episodes in the week ahead. We’ll give you updates as other details emerge. Stay tuned to the CBS soap and don’t forget to check CDL often for the latest Bold and the Beautiful spoilers, updates, and news.