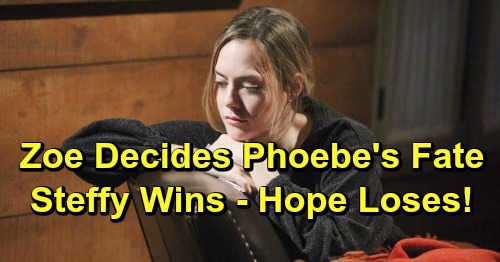 The Bold and the Beautiful (B&B) spoilers tease that a heated confrontation is on the way. Dr. Reese Buckingham (Wayne Brady) knows he’s in big trouble thanks to Zoe Buckingham’s (Kiara Barnes) outraged phone call. He can only hope he explains the situation well enough to avoid full exposure.

It’s one thing for Reese’s daughter to know the baby secret. It’s quite another for Hope Spencer (Annika Noelle) or Steffy Forrester (Jacqueline MacInnes Wood) to learn the truth. Reese will realize he’s at Zoe’s mercy, so he’ll do his best to make her understand that his back was against the wall.

After Reese flies back into town, he’ll come face to face with an incensed Zoe. She’ll immediately rip into Reese for lying to Hope and Steffy about this child. Reese will confirm that he indeed made Hope believe Beth Spencer was dead and facilitated the adoption. Nevertheless, he’ll assure Zoe that this wasn’t about making a quick buck.

The Bold and the Beautiful spoilers say Reese will describe the fear he was dealing with. He’ll explain that he owed a lot of money and the thugs who came to collect it were threatening Zoe’s life. Reese will insist he wouldn’t have even considered a plan like this if it weren’t for the danger to Zoe.

Of course, Zoe won’t have much sympathy. She’ll contend that it’s Reese own fault for gambling and letting it get that far. Zoe won’t think Reese deserves points for saving her when he brought the peril in the first place. Besides, she just won’t believe anything could justify the nightmare he’s inflicted on poor Hope and Liam Spencer (Scott Clifton).

B&B fans can expect Reese to pour his heart out and beg for Zoe’s silence. He’ll understand that Zoe’s angry and ready to blab, but he’ll encourage her to take a step back and cool off. Reese will want Zoe to see that the consequences will be brutal if she comes forward. He’d lose his career and go to prison. Steffy, who happens to be Zoe’s boss, would also lose the baby she’s already come to love.

The Bold and the Beautiful spoilers state that Zoe will express extreme disappointment in her father, but she’ll obviously hate to take him down. She’ll also worry about how this could affect her own job and Steffy’s happiness. It’ll be a huge mess, so contemplating her next move won’t be easy.

By deciding Reese’s fate, Zoe will be deciding “Phoebe Forrester’s” (Isabela de Armas and Redford Prindivlle) as well – at least for now. However, it doesn’t look like this story’s wrapping up just yet. It seems Zoe will choose to keep quiet and let this hot plot get even hotter!