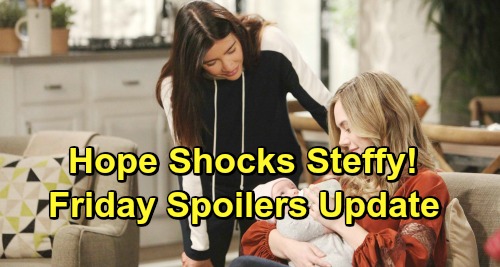 The Bold and the Beautiful (B&B) spoilers for Friday, February 15, tease that Bill Spencer (Don Diamont) will reevaluate his life and consider what his future should look like. His family’s always been important to him, but he used to let things like money and skyscrapers get in the way. Now Bill’s trying to be a better man and stick with all the positive changes he’s embraced.

Bill’s new attitude has brought him closer to Will Spencer (Finnegan George), which has warmed Katie Forrester’s (Heather Tom) heart. They’ve come so far since that brutal custody battle. The Bold and the Beautiful spoilers say Bill will want to build on that. He’ll mull over tactics that could help him get his family back and repair any damage he caused.

Of course, Bill won’t want to scheme too hard. That would mean reverting to old habits, which wouldn’t help him in the long run. Still, Bill will think there must be strategies he can use. He’ll toss a few at Justin Barber (Aaron D. Spears) as they chat in Friday’s B&B episode.

Justin may warn Bill not to get his hopes up, but it’ll be too late for that! When Bill puts his mind to something, there’s no stopping him. Bill’s made great strides in his relationship with Will, so he’ll just have to rev up the charm with Katie. He’ll want to show her the changes he’s made are going to stick.

If Bill can do that, he may think pushing Thorne Forrester (Ingo Rademacher) out of the picture will be a piece of cake. However, that part of the mission has already been accomplished. Thorne gave Katie annulment papers and announced that he’d be moving back to Paris, so Bill will have a clear path to Katie.

Naturally, there’s more to Bill’s family than just Katie and Will. He won’t forget about his older sons as he thinks about what’s next. Bill and Liam Spencer’s (Scott Clifton) bond is slowly on the mend, so this remorseful dad will want to keep healing their connection. He’ll also plan to get Wyatt Spencer (Darin Brooks) back at Spencer Publications as soon as possible.

While Justin helps Bill focus on his goals, Katie will be glum over her failed marriage. She’ll end up confiding in Wyatt, who’ll be taken aback over the annulment news. The Bold and the Beautiful spoilers say Wyatt will console Katie and assure her that brighter days are ahead. He still cares for Katie and wants only the best for her.

The Bold and the Beautiful won’t forget about it’s central storyline so fans can expect plenty of drama as Hope Logan (Annika Noelle) surprises Steffy Forrester (Jaqueline MacKinnes Wood) by coming over to help with Kelly and Phoebe. Of course B&B fans know that Hope is obsessed with baby Phoebe (for GOOD reason!) and only feels some relief from her gripping depression when she’s with the infant.

What’s not clear is for how long Steffy will tolerate another woman, one who she thinks stole to her ex-husband, Liam Spencer (Scott Clifton), hanging around her adopted baby so much.

B&B fans won’t want to miss Friday’s gripping scenes. We’ll give you updates as other details emerge. Stay tuned to the CBS soap and don’t forget to check CDL often for the latest Bold and the Beautiful spoilers, updates and news.