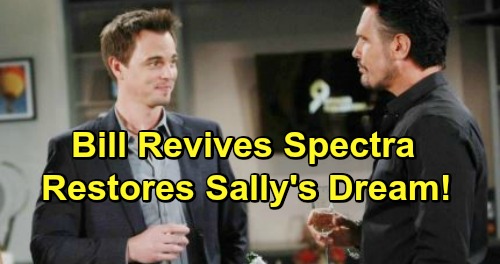 The Bold and the Beautiful (B&B) spoilers tease that Wyatt Spencer (Darin Brooks) will receive an offer from his father. B&B fans know Bill Spencer (Don Diamont) tends to make a mess when it comes to his family, but he really loves his boys. Bill may not always do a great job of showing it, but he’s trying to change that. He’ll keep doing his best to make things right as he stays on his new-and-improved path.

Part of Bill’s plan will involve luring Wyatt back to Spencer Publications. He wants this to remain a family business, so it’s important for him to be working alongside his son. The Bold and the Beautiful spoilers say Bill will offer a very generous salary and plenty of perks. He’ll provide all the bells and whistles needed to make Wyatt see this job as a fantastic opportunity.

Bill will wonder what more Wyatt could possibly want, but it turns out there’ll be one more thing. Wyatt will thrill Bill by agreeing to return to Spencer Publications. He’ll just have one condition if it’s going to happen. Wyatt will insist that this is non-negotiable. He’ll trust that Bill’s desperate enough to cave in and be willing to walk away if he’s not.

Next week, B&B spoilers say Wyatt will push for the revival of Spectra Fashions. He loves Sally Spectra (Courtney Hope) and truly believes in her talent. Since it’s Bill’s fault that Sally lost Spectra, Wyatt will think it’s Bill’s responsibility to give it back. He’ll push Bill to do what’s right and restore Sally’s dream.

Bill will think Wyatt drives a hard bargain, but he’ll ultimately make the deal. Wyatt will return to Spencer, Sally will get great news about Spectra and Bill will have his son working with him again. It sounds like a real victory all around!

Of course, this could provide a bit of a distraction in terms of the baby storyline. Wyatt and Sally recently noticed a striking resemblance between Kelly Spencer (Zoe Pennington and Chloe Teperman) and “Phoebe Forrester” (Isabella de Armas and Redford Prindiville). They seem poised to fit in the big reveal, especially since Katrina Bowden (Florence “Flo” Fulton) has grown close to Brooks on set.

Bowden praised Brooks for being a huge help to her, so it makes sense that they’ll share scenes eventually. It’s possible Flo will stick around and score a Spectra job. She might have some surprising knack for fashion that could keep her in the story.

If not, Spectra’s revival could mean another crushing blow for Hope. It may bring setbacks when it comes to any discoveries Wyatt and Sally might’ve made. Are you eager to see the next phase of this Bold and the Beautiful baby plot? We’ll give you updates as other details emerge. Stay tuned to B&B and don’t forget to check CDL often for the latest Bold and the Beautiful spoilers, updates, and news.