The Bold and the Beautiful Spoilers: Hope and Steffy Bond Over New Baby Tragedy – Health Crisis Brings Moms Together

BY Heather Hughes on January 29, 2019 | Comments: one comment
Related : Soap Opera, Spoiler, Television, The Bold and the Beautiful 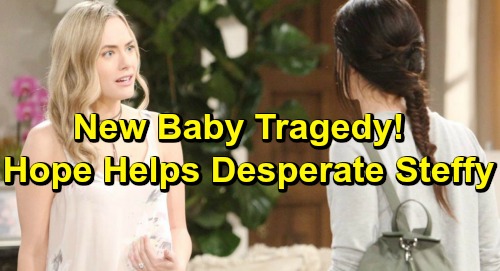 The Bold and the Beautiful (B&B) spoilers tease that some shocking scenes are on the way. A tragedy will strike that centers around one of Steffy Forrester’s (Jacqueline MacInnes Wood) babies. There’s no word yet on whether it’ll be Kelly Spencer (Zoe Pennington and Chloe Teperman) or Phoebe Forrester (Rosaline Aune and Isabella de Armes), but it sounds like a health crisis could be brewing.

This ordeal will actually bring Steffy and Hope Spencer (Annika Noelle) together. They’ll bond during a difficult time, so perhaps Steffy will be concerned about losing one of her girls. There are several ways B&B could take this story. It’s possible Liam Spencer (Scott Clifton) and Hope will be the perfect match for some sort of donation Phoebe needs. That might force Reese to come clean.

Then again, Kelly could be the one who’s ailing. In that case, perhaps Phoebe could be a surprising match and raise suspicions for someone. It might serve as a crucial clue that’ll come up again later. Whatever the case, The Bold and the Beautiful spoilers say fears will grow and hearts will break. It looks like it’ll be Hope’s turn to sink into darkness and worry about what the future holds.

The thought of losing Phoebe could make Steffy realize just how devastated she’d be if she was gone. If Phoebe ends up saving Kelly instead, that’d be an equally good reason for the love in Steffy’s heart to grow. The Bold and the Beautiful will really go all in on this. They’ll hope to establish a strong connection between Steffy and Phoebe so that it’ll be crushing when the truth comes out.

Steffy may be on cloud nine right now, but her bliss isn’t going to last. Sooner or later, Steffy will be the one who’s heartbroken. She’ll have to hand Beth back over to Hope and accept that it’s not her little girl to keep! We’ll give you updates as other B&B news comes in. Stay tuned to the CBS soap and don’t forget to check CDL often for the latest Bold and the Beautiful spoilers, updates, and news.