BY Heather Hughes on February 15, 2019 | Comments: one comment
Related : Soap Opera, Spoiler, Television, The Bold and the Beautiful 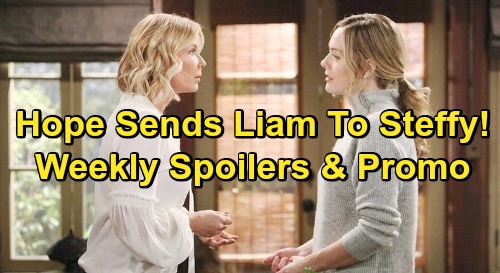 The Bold and the Beautiful (B&B) spoilers for the week of February 18-22 tease that we’ll see some big surprises and major concerns. For starters, Bill Spencer (Don Diamont) will fill Wyatt Spencer (Darin Brooks) in on a job offer. He’ll deliver an enticing proposal that he hopes will be impossible to turn down.

However, Wyatt will play hardball with his father. He’ll like what he hears, but he’ll refuse to get on board without one more thing. Wyatt will want Spectra Fashions to be revived so Sally Spectra (Courtney Hope) can have true happiness, too. He knows Sally still dreams of running her own fashion house, so he’ll be determined to make this happen for her.

When Sally hears about Bill’s offer to Wyatt, she’ll battle some worries. Sally and Bill have a rocky history, so she won’t love the idea of Wyatt getting close to him again. At the same time, Sally will understand that Bill is Wyatt’s dad. She won’t want to stand in the way of their relationship.

Sally will also find out about Wyatt’s demands, so she’ll be quite touched. She’ll appreciate the grand gesture, which will ultimately work out well. The Bold and the Beautiful spoilers say Bill will agree to fulfill Wyatt’s request, so they’ll all get what they want.

Over with Katie Forrester (Heather Tom), she’ll give Donna Logan (Jennifer Gareis) and Brooke Forrester (Katherine Kelly Lang) updates on her annulment. They’ll be stunned to learn Thorne Forrester (Ingo Rademacher) dropped this on Katie out of the blue. Brooke and Donna will want to do everything they can to ease the pain for Katie, so they’ll offer plenty of support.

Hope will stand by her attempt to push the “Steam” family together. In fact, she’ll start to wonder if she’s hindering Liam’s happiness with their current marriage. Elsewhere, Zoe Buckingham (Kiara Barnes) will unleash her wrath. She’ll blast Dr. Reese Buckingham (Wayne Brady) for stealing Hope’s baby and selling it to Steffy, but he’ll contend that he was just trying to save his daughter’s life.

The Bold and the Beautiful spoilers say Zoe will want Hope and Steffy to know the truth, but she’ll face Reese’s desperate plea. He’ll want Zoe to keep her mouth shut for many reasons, so she’ll have to figure out what to do. B&B spoilers tease that she will suppress her urge to tell the truth and instead chicken out.

Back with Hope, her obsession with “Phoebe” will grow stronger. As B&B fans might expect, Steffy and Liam’s fears will grow, too. They’ll know Hope’s attachment just isn’t healthy.