BY hellodrdavis on February 19, 2019 | Comments: 4 comments
Related : Soap Opera, Spoiler, Television, The Bold and the Beautiful 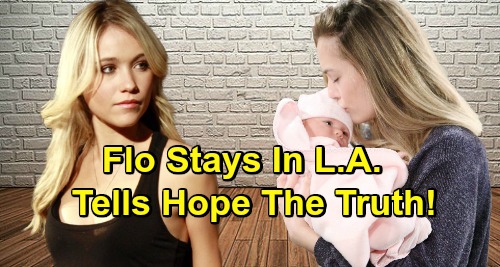 The Bold and the Beautiful spoilers tease that Florence “Flo” Fulton (Katrina Bowden) is going to remain on the Los Angeles scene for a while. Right now, she’s knee-deep in baby swap/adoption drama along with Dr. Reese Buckingham (Wayne Brady), but at some point, that storyline will wrap up or take a back burner. But unlike Wayne Brady, who will be wrapping his stint on B&B in a few weeks, Katrina Bowden is here for the long haul.

According to B&B spoilers, Flo will decide to stay in Los Angeles in lieu of returning to Las Vegas. She’ll look for work, and soon she’ll land a job. But where will she find a position? Well, we can think of a couple of possibilities, and one could involve Wyatt Spencer (Darin Brooks).

When Katrina Bowden initially tested for the role of Flo, she read with Darin Brooks, indicating that TPTB intended for her to share some serious screen time with Wyatt n the future. Since Wyatt seems to be happy with Sally Spectra (Courtney Hope) right now, it doesn’t seem like Flo would be an immediate love interest for Wyatt at this time.

But it looks like Wyatt’s headed back to Spencer Publications, and he and/or Sally may need a fresh team for their new ventures. Wyatt could hire Flo for one of his projects, or for Spectra Fashions. That could certainly stir things up for Sally and Wyatt if Flo eventually becomes smitten with Wyatt.

Another possibility is that Flo could end up working at Forrester Creations. B&B spoilers say that Flo will soon be shaken when she comes face to face with Hope Spencer (Annika Noelle). Could this happen during a job interview at Forrester?

Whatever the case, Flo will likely be very rattled when she realizes that the “Hope” she has just met is the same Hope who is Phoebe Forrester’s (Isabella de Armes and Redford Prindiville) real mother. It would certainly be tough if Flo worked directly for Hope at Forrester while keeping the secret about her baby.

Could Flo’s regular contact with Hope lead to some slip that unravels the baby swap scam? Perhaps even empathy might come into play and force Flo to work to right the great wrong that’s been done to poor Hope.

Are you excited that Flo will be staying in Los Angeles for a while? Stay tuned to the CBS soap and don’t forget to check CDL often for the latest Bold and the Beautiful spoilers, updates, and news.