BY hellodrdavis on February 19, 2019 | Comments: 2 comments
Related : Soap Opera, Spoiler, Television, The Bold and the Beautiful 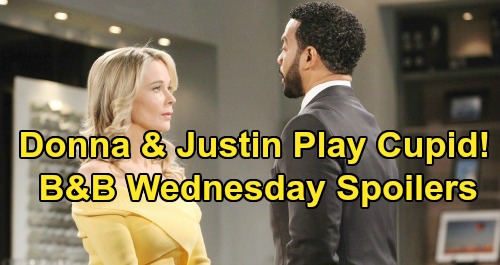 The Bold and the Beautiful spoilers for Wednesday, February 20, tease that Wyatt Spencer (Darin Brooks) will have some wild news for Sally Spectra (Courtney Hope). Wyatt will be fresh back from meeting with his dad Bill Spencer (Don Diamont), where Bill just offered both him and Sally a position at Spencer Publications.

This will come as a shock to Sally, who isn’t Bill’s biggest fan. Sally and Bill have been at odds for a while now, and Sally tends to hold grudges pretty deep. But Sally also knows that Wyatt’s relationship with his dad is important to him. She’ll see that Wyatt is seriously considering the offer, and she’ll offer her support.

Sally will let Wyatt know that whatever decision he makes, she’ll back him. She’ll know that it would be a huge step forward in Wyatt’s relationship with his dad if he went back to Spencer, and she’ll offer Wyatt encouragement to do what he thinks is best.

But Wyatt will have an idea. He’ll tell Sally that he’s going to agree to go back to Spencer and work with his dad, but only if Bill agrees to revive Spectra Fashions. Wyatt wants Sally to get her fashion house back, and he’ll make that a condition of his return to Spencer.

Sally will love the idea, and she’ll be truly touched that Wyatt would generate such a plan for her. It looks like Wyatt’s move will bring “Wally” even closer together. It will really be a win-win for everyone. Wyatt will be back in his family’s company, Sally will regain her fashion house, and they’ll still be able to enjoy working together.

Meanwhile, on the new B&B episode on Wednesday, February 20, Justin Barber (Aaron D. Spears) will arrange a secret meeting with his ex, Donna Logan (Jennifer Gareis). Justin will want to discuss the situation between Bill and Katie Forrester (Heather Tom). Justin knows that Bill would like his family with Katie and Will Spencer (Finnegan George) back, and he’d like to help make that happen.

Justin may want to compare notes with Donna about what’s in Katie’s heart, now that Thorne Forrester (Ingo Rademacher) is out of her life. He knows that Katie has likely confided in Donna about her feelings for Bill, and he’ll want that intel to see if there’s a chance that he can somehow push Bill and Katie together.

It looks like Justin will ask Donna to help him in his matchmaking quest and Donna will agree. She’ll probably want to cleverly scope out Katie’s feelings for Bill, to see if Katie really does still love Bill and has any interest in getting back together with him.