BY Heather Hughes on March 29, 2019 | Comments: one comment
Related : Soap Opera, Spoiler, Television, The Bold and the Beautiful 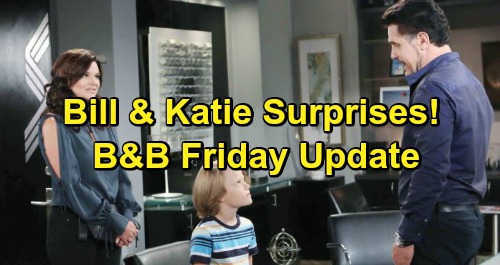 The Bold and the Beautiful (B&B) spoilers for Friday, March 29, tease that Brooke Forrester (Katherine Kelly Lang) will be pushed to her limit. No one can infuriate her quite like Dr. Taylor Hayes (Hunter Tylo) can, especially when their kids are involved. Brooke and Taylor have already been sparring over which of their daughters Liam Spencer (Scott Clifton) belongs with, but there’ll be another layer of drama soon enough.

In Taylor’s mind, it’d be a win-win situation. Hope would get a child to fill the void in her heart and a loyal man to go along with him. Meanwhile, Liam would reunite with Steffy Forrester (Jacqueline MacInnes Wood) and help her raise the girls. Everybody’s happy, right? Wrong! Brooke will seethe when Ridge Forrester (Thorsten Kaye) tries to explain Taylor’s misguided point of view.

Even if Taylor’s grand plan were to work, it’s not her place to pick her grown children’s love interests. Thomas and Steffy are adults, so they’re more than capable of handling things in the romance department. Brooke won’t like the idea of Taylor manipulating everything at Hope’s expense. She’ll insist that Hope and Liam are already a good match, so there’s no need to introduce another option.

Ridge will be on the same page, but he may not think Taylor’s a legitimate threat. Brooke, on the other hand, knows what her rival is capable of. She’ll start plotting ways to stop Taylor, including having a chat with one of her intended victims. The Bold and the Beautiful spoilers say Liam will get a visit and a warning in the week ahead.

In the meantime, Bill Spencer (Don Diamont) and Katie Forrester (Heather Tom) will walk right into another romantic setup. They’re beginning to expect these traps by now! B&B fans will see a delightful evening that features some top-notch gourmet cuisine.

The Bold and the Beautiful spoilers state that Tamar Braxton will play Chef Chambre in this fun episode. She’ll explain her fabulous menu before leaving Katie and Bill to flirt alone. Of course, they’ll continue to wonder about the identity of their mysterious matchmaker. It turns out Will Spencer (Finnegan George) has taken the lead on shooting most of Cupid’s arrows.

That’ll be an amusing revelation for “Batie” next week, so it should bring this family even closer. We’ll give you updates as other B&B news comes in. Stay tuned to the CBS soap and don’t forget to check CDL often for the latest Bold and the Beautiful spoilers, updates, and news.