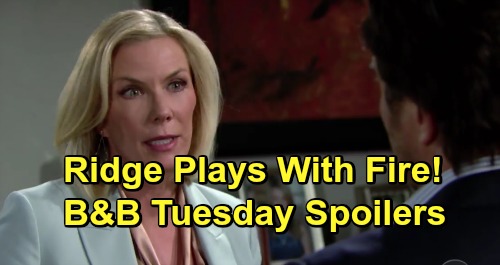 The Bold and the Beautiful spoilers for Tuesday, April 2, tease that Brooke Forrester (Katherine Kelly Lang) will reel after hearing about Taylor Hayes’ (Hunter Tylo) desire for Hope Spencer (Annika Noelle) and Thomas Forrester (Matthew Atkinson) to get together. Ridge Forrester (Thorsten Kaye) has just reluctantly filled Brooke in on Taylor’s wish that Hope, Thomas, and Douglas Forrester (Henry Jospeh Samiri) will spend time together and form a new family unit.

Of course, this news has outraged Brooke, who knows that pushing Thomas and Hope together would just help Taylor achieve her ultimate goal of getting Steffy Forrester (Jacqueline MacInnes Wood) and Liam Spencer (Scott Clifton) back together. All Brooke wants is for Hope to remain happy in her marriage to Liam and to try to find a way to heal from the loss of her daughter Beth Spencer.

The Bold and the Beautiful spoilers say that Brooke will share her frustrations over Taylor’s desires for their daughters with Ridge, but she’ll be shocked when Ridge doesn’t think it’s that big of a deal. Ridge won’t think that Taylor’s observations will be much to worry about, and Brooke won’t understand his perspective at all. She’ll think that Ridge is simply giving Taylor a free pass for wanting what’s best for Steffy.

Meanwhile, on the new episode of B&B on Tuesday, April 2, Katie Logan (Heather Tom) and Bill Spencer (Don Diamont) will enjoy a chuckle over what they’ve just discovered. They went on a mission to find out who their secret matchmaker was, and that led them to grill Justin Barber (Aaron D. Spears), Wyatt Spencer (Darin Brooks), and Donna Logan (Jennifer Gareis) pretty intensely.

But after a while, they realized that there was someone else who just might be their cupid…their young son Will Spencer (Finnegan George). They cornered Will, who ultimately admitted to stealing his father’s credit card and setting up Bill and Katie’s romantic dinner earlier that evening. On Tuesday’s B&B episode, Bill and Katie will talk privately about their son’s actions, and they’ll find the humor in the situation.

But it just might lead the two of them to consider some things that Will said. Will wondered if maybe he saw something between Bill and Katie that they couldn’t yet see…like a growing attraction and renewed love. It would be nice to see Bill and Katie have a nice frank talk about their situation, because it’s clear that there’s a renewed spark between them.