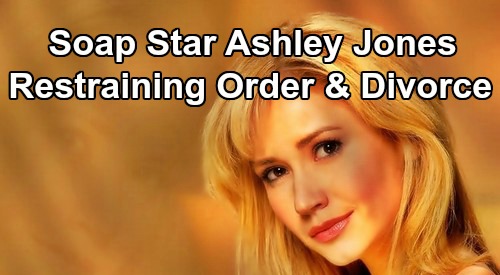 The Bold and the Beautiful (B&B) spoilers reveal that one CBS soap star recently filed for a restraining order. B&B fans know Ashley Jones as Bridget Forrester, but General Hospital viewers will also recall her work as Parker Forsythe on GH. Jones got her start on soaps playing Megan Dennison on The Young and the Restless, so she’s a well-known actress in the world of soap opera daytime dramas.

Sadly, Jones has been dealing with some drama in her personal life, and it involves her allegedly violent husband. TMZ reports that Jones was granted a restraining order after she claimed her spouse, Joel Henricks, physically abused her. Jones argued that she feared for her life and the life of the three-year-old son she shares with Henricks.

The judge signed off on the restraining order after Jones described how the abuse worsened over time. She claimed a struggle over a cell phone in 2017 crushed her hand and resulted in a spiral fracture. Jones decided to leave her husband in August, but she asserted that he tracked her whereabouts using a device he secretly planted on her car.

Since Jones’ husband allegedly also owns a small collection of guns, she offered that as another reason she lives in fear. The restraining order requires Henricks to stay at least 100 yards away from Jones and their little boy. He’s not allowed to have any contact with them, so this is a serious situation. We should add that Jones filed for divorce soon after being granted protection.

The Bold and the Beautiful spoilers say there are seemingly no plans to bring Bridget back right now, which is probably for the best. It sounds like Jones has a lot on her plate and will want to figure out a path forward before she focuses on her career.

However, Jones does have a small upcoming role on Diggstown, which features fellow GH alum Vinessa Antoine (ex-Jordan Ashford). Jones’ character is named Tara Prescott, and her episode is set to air on March 1, 2020. We’ll give you updates as other news comes in on Ashely Jones. Stay tuned to B&B and don’t forget to check CDL often for the latest Bold and the Beautiful spoilers, updates and news.