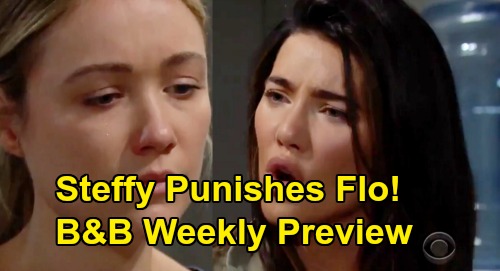 The Bold and the Beautiful (B&B) spoilers for the week of September 9-13 tease that we’ll see some flirty moments and powerful confrontations. First, let’s talk about the renewed lovebirds. Sally Spectra (Courtney Hope) is proceeding with caution, but she likes the idea of moving forward with Wyatt Spencer (Darin Brooks) and having a future together.

Wyatt and Sally will admire each other in some fun scenes, which will lead to a passionate kiss. The Bold and the Beautiful spoilers say Wyatt will be ready to get their romance back on track. He’ll want to kick things up a notch, and he’ll have a plan to make it happen.

Wyatt will ask Sally to move back in the beach house with him, but she’ll have reservations about making that kind of commitment. Although Sally loves Wyatt, she’ll be hesitant to pick up where they left off. Sally will feel like she needs to guard her heart, so Wyatt may have to be patient.

Other B&B spoilers say Steffy Forrester (Jacqueline MacInnes Wood) will blast Florence “Flo” Fulton (Katrina Bowden). She’ll be seething as she visits Flo and talks about her intense pain. Losing “Phoebe Forrester” aka Beth Spencer (River Davidson and Madeline Valdez) was one of the worst experiences of Steffy’s life. She’s beyond devastated, and Flo deserves a good chunk of the blame.

Steffy will rant about how Flo destroyed families with her lies. She’ll hope Flo rots in prison since it’s exactly what she deserves. Unfortunately, Ridge Forrester (Thorsten Kaye) will make a decision that eliminates that possibility. Flo won’t be doing hard time, and it’s all because of a deal Ridge will make for Thomas Forrester (Matthew Atkinson).

That deal will infuriate Brooke Forrester (Katherine Kelly Lang), who’ll think both Flo and Thomas should suffer for what they did. Ridge won’t disagree on Flo, but he’ll be adamant about protecting Thomas and that means protecting Flo, too. He’ll insist his priority is his son and contend that Thomas simply made a mistake.

Ridge’s continued defense of Thomas will leave Brooke riled up in the week ahead. She’ll declare that Thomas doesn’t need protection; he needs to pay! The Bold and the Beautiful spoilers say these will be some can’t-miss showdowns, so stay tuned. We’ll give you updates as other B&B news comes in. Stick with the CBS soap and don’t forget to check CDL often for the latest Bold and the Beautiful spoilers, updates and news.