The Bold and the Beautiful Spoilers: B&B’s Next Pregnancy Story – Which Character Will Bring Baby Drama? 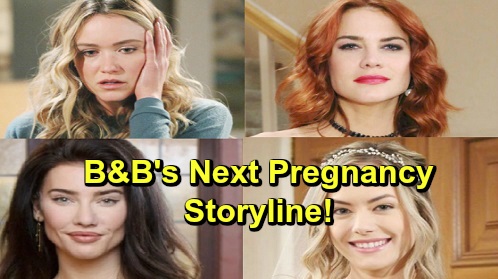 The Bold and the Beautiful (B&B) spoilers tease that it may not be long until more baby drama hits. Pregnancy stories are a huge part of the genre, so it’s just a matter of time before another one strikes. Who will be the next character to have a bun in the oven? Let’s consider a few options.

For starters, we have Hope Logan (Annika Noelle). She was recently reunited with Beth Spencer (River Davidson and Madeline Valdez), but she was robbed of Beth’s first months and milestones. Could Hope eventually long for Beth’s little brother or sister? She might talk Liam Spencer (Scott Clifton) into adding to their family down the road.

Of course, Steffy Forrester (Jacqueline MacInnes Wood) could be an option as well. She’s not currently in a relationship, but that could change sooner or later. Whether Steffy gets back together with Liam or finds love with someone else, it’d be nice to see her have another child one day. Steffy can’t replace “Phoebe Forrester,” but she can perhaps fill that void in her heart somewhat.

However, both Hope and Steffy are bun-in-the-oven options that’d take some time to play out. Neither one of them seems to be in the right place for that just yet. If B&B wants a pregnancy in the more immediate future, there are two other far better possibilities. Liam passed the waffling torch to his brother, Wyatt Spencer (Darin Brooks), who’s currently got two ladies he’s torn between.

Wyatt recently proposed to Sally Spectra (Courtney Hope), but he’s obviously not over Florence “Flo” Fulton (Katrina Bowden). The “Wally” engagement is probably destined to be called off, but could a pregnancy curveball change the game? Will Wyatt reunite with Flo only to discover Sally’s having his baby? That’d be an interesting way to keep this love triangle moving along.

On the flip side, perhaps Wyatt could surrender to a moment of weakness and sleep with Flo. That could leave her pregnant after Wyatt’s mistake. He might truly decide he’s all in with Sally only to find out Flo’s having his kid. That’d be an equally dramatic scenario that could also keep this love triangle going strong.