The Bold and the Beautiful Spoilers: Steffy and Hope’s Rivalry Heats Up Again – Thomas Fuels Conflict Over Liam and Fashion 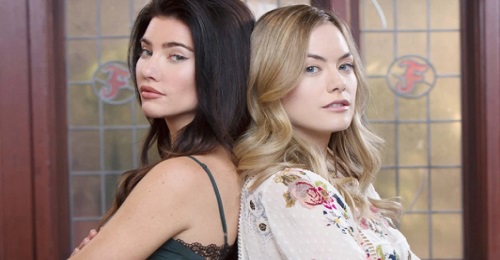 The Bold and the Beautiful (B&B) spoilers tease that Thomas Forrester (Matthew Atkinson) could fuel plenty of conflict in the coming weeks. B&B fans know Thomas didn’t face legal consequences in Emma Barber’s (Nia Sioux) death or for his knowledge of the baby swap. However, he still paid the price thanks to Brooke Forrester’s (Katherine Kelly Lang) shove, which sent him hurling over the edge of a cliff.

Thomas nearly died, so you’d think he’d decide to make the most of his second chance and be a better person. Someone in the real world might, but not in the soap world! The Bold and the Beautiful has to take the most dramatic route, so Thomas will try to spark a Forrester-Logan war. He’ll decide the Logans are the enemy and must be eradicated. Thomas will refuse to back down until every last Logan is out of their lives.

Of course, that’ll include Hope Logan (Annika Noelle). Thomas was obsessed with her before and truly wanted a future together. His chance at wedding bliss blew up with the baby switch secret, so now he surely knows there’s no point in pursuing her. If he doesn’t, Hope will certainly remind him!

Without that romantic shot, Thomas will have no use for Hope. Her connection to Brooke will make Thomas even more determined to turn against her. How will Thomas do that? Could he attempt to stir up some tension between Hope and Steffy Forrester (Jacqueline MacInnes Wood)? Getting the Hope for the Future line dropped would probably be a nice start.

Once Thomas has created a Steffy-Hope battle, he can focus on derailing Hope and Liam Spencer’s (Scott Clifton) relationship. The Bold and the Beautiful spoilers say they’ll try to keep Douglas Forrester (Henry Joseph Samiri) away from his father, which will infuriate Thomas. He may even use Steffy to come between Liam and Hope – at least if he can.

Do you think Thomas will reignite Hope and Steffy’s rivalry? It sounds like the excitement’s about to rev up, so don’t miss all the action. We’ll give you updates as other B&B news comes in. Stay tuned to the CBS soap and don’t forget to check CDL often for the latest Bold and the Beautiful spoilers, updates and news.