BY Heather Hughes on July 13, 2019 | Comments: one comment
Related : Soap Opera, Spoiler, Television, The Bold and the Beautiful 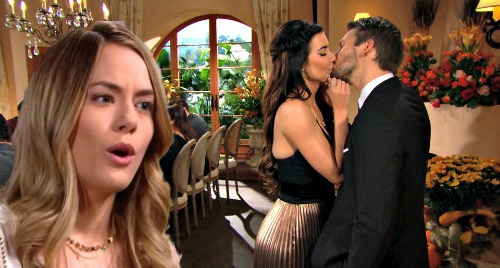 The Bold and the Beautiful (B&B) spoilers tease that Liam Spencer (Scott Clifton) and Hope Logan’s (Annika Noelle) relationship will start to shift. Right now, Hope and Liam are very much still in love. Although Liam’s got a lot of love left in his heart for Steffy Forrester (Jacqueline MacInnes Wood) as well, Liam can’t shake the marriage he wanted with Hope. He truly fought hard to save what Lope had.

Liam has been reconnecting with Steffy lately, but he’s still drawn to his latest ex-wife. Part of that is due to Thomas Forrester (Matthew Atkinson) and his obsessive need to be with Hope. Pretty much everyone can see that this is unhealthy – everyone except Hope of course. She’s too blinded by the pain of everything she’s been through. Losing Beth Spencer changed Hope’s life in some terrible ways.

Liam wants to be Hope’s protector, but how will he feel once Thomas and Hope are married? It looks like they’ll indeed become husband and wife, so Liam will have to make a choice. He can back off and truly let go or keep fighting to make Hope see the light. B&B marriages never last, so Liam may count on this one not lasting either.

The Bold and the Beautiful spoilers say Thomas’ obsession with Hope will get even worse, so Liam might see stronger warning signs. He may find it difficult to just turn his back on Hope and focus on his own future. When you deeply care for someone, letting that person go is easier said than done. When you throw in a threat, it makes things even more complicated.

In other words, Liam may still feel quite close to Hope by the time the big reveal happens. Liam has already bonded with “Phoebe Forrester” (River Davidson and Madeline Valdez) and feels like her dad. He’s built a family unit with Steffy, “Phoebe” and Kelly Spencer (Zoe Pennington). Liam will certainly want Hope to have their child back, but his sympathy may shift to Steffy in the aftermath.

It’s easy to imagine conflict slowly growing between Hope and Liam. He may argue that there has to be a transitional period – for the sake of both “Phoebe” and Steffy. Liam’s heart will break for Steffy after she endures her own kind of loss. Instead of bringing Liam and Hope together, the big reveal may crumble the connection they’re fighting now and push Liam much closer to Steffy.