The Bold and the Beautiful Spoilers: Liam Finds His Perfect Match – Hope or Steffy, Which Woman Does He Wind Up With?

BY Heather Hughes on July 13, 2019 | Comments: one comment
Related : Soap Opera, Spoiler, Television, The Bold and the Beautiful 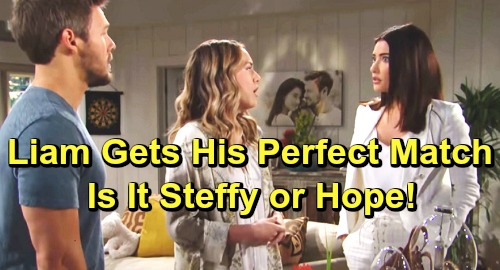 The Bold and the Beautiful (B&B) spoilers reveal that the Beth Spencer drama will continue to heat up as Thomas Forrester’s (Matthew Atkinson) obsession with Hope Logan (Annika Noelle) grows stronger.

Part of Liam is always going to be drawn in Hope’s direction, but another part of him will always be pulled toward Steffy Forrester (Jacqueline MacInnes Wood). This has been a major B&B love triangle for years and shows no signs of letting up. However, many fans are longing for Liam to make a firm choice and stop waffling – at least for a decent period of time.

Liam Spencer Needs To Settle On One Of The Two Women

If Liam could settle on one woman longer than a few months, the other could heal and perhaps move on. There’s no guarantee The Bold and the Beautiful will ever let that happen, but it’d be nice to have a break from the constant “Steam” and “Lope” wars. Since Liam goes back and forth between his loves so often, it’s surprising either one of them thinks he’s worth the trouble!

Even so, the heart wants what it wants. Both Hope and Steffy have always struggled with deep feelings for Liam. They’ve endured all the waffling over the years, so someone might as well be with him now.

Which woman does Liam truly belong with? Is Hope his perfect match or is it Steffy? There’s plenty of history on both sides, and both women have qualities that Liam appreciates.

Hope can be quite caring – just like she’s been with Douglas Forrester (Henry Joseph Samiri) lately. Nobody’s perfect, but Liam views Hope as a beacon of light. That’s why it’s been tough for him to see that light dimmed and her broken heart preyed upon by Thomas.

Liam also admires Steffy’s strength and daring nature. She’s made her fair share of mistakes over the years, but she’s done some good things, too. Liam undoubtedly finds Steffy’s resolve and passion appealing. Hope brings the sweet and Steffy brings the spice, so it’s easy to see why Liam bounces between them so much.