The Bold and the Beautiful Spoilers: Bill Warns Hope About Thomas Danger – The Only Spencer Capable of Taking Thomas Down

BY hellodrdavis on December 31, 2019 | Comments: 3 comments
Related : Soap Opera, Spoiler, Television, The Bold and the Beautiful 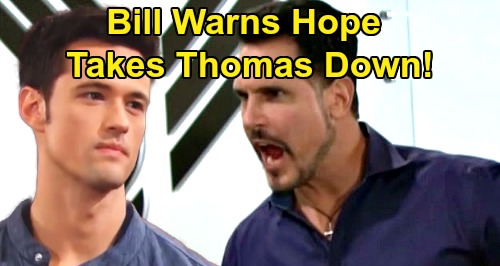 The Bold and the Beautiful (B&B) spoilers tease that Bill Spencer (Don Diamont) will soon issue a warning. As B&B viewers know, Hope Logan (Annika Noelle) has recently decided to allow Thomas Forrester (Matthew Atkinson) to be the lead designer on her Hope For The Future (HFTF) line. Thomas arranged for a big fashion showdown to take place at Forrester that will pit HFTF against Steffy Forrester’s (Jacqueline MacInnes Wood) line. Whoever wins gets critical Forrester funding, so the stakes are high.

Well, there’s definitely one person who’s not happy about Hope’s decision to work closely with Thomas, and that’s Liam Spencer (Scott Clifton). He’s protested the whole thing, but Hope went right on ahead and brought Thomas on board in order to give HFTF a chance to survive.

And now, Liam has a secret plan in place to get the goods on Thomas’ true intentions – he’s enlisted Zoe Buckingham (Kiara Barnes) to spy on Thomas.

Unfortunately for Liam, B&B buzz says it looks like his plan might end up being a total bust, and that’s because Zoe is most likely going to fall for Thomas.

Thomas is hotly pursuing Zoe, and while for now it’s all a ruse to get Hope to think that he’s moved on, it certainly looks like Zoe is going to believe that the whole thing is for real. And if she ultimately refuses to work against Thomas, then Liam will be right back at square one.

The Bold and the Beautiful spoilers tell us that Bill will get wind of the situation going on with Hope and Liam. Dollar Bill won’t be particularly happy to learn that Hope is spending so much time around one of the people who conspired to keep Beth Spencer’s (River Davidson and Madeline Valdez) existence a secret from the family.

B&B viewers will remember that Bill vowed to bring Thomas down, along with the rest of the people who were in on the Beth secret. The Bold and the Beautiful spoilers say that Bill will end up having a little talk with Hope, during which he’ll warn her about the dangers of working with Thomas.

Chances are, though, Hope won’t listen to him and she’ll continue on working with Thomas on HFTF. But all of this leads us to wonder whether Bill’s desire to go after Thomas will be renewed, now that he knows that Hope is likely getting duped by him once again.

Bill may take matters into his own hands and start his own investigation into what Thomas is up to. Let’s face it, Liam just doesn’t have it in him to go toe to toe with Thomas, who’s on a whole other level of manipulativeness that Liam can even fathom.

But Bill is another story – he’s a manipulator extraordinaire in his own right, and he could certainly go after Thomas and find out what he’s up to…plus administer some punishment along the way.

Could Bill ultimately be the one who brings down Thomas? One thing’s for sure – that’s a fight that would be enjoyable to watch and could have all sorts of twists and turns along the way.

Do you think Bill will be the one to expose Thomas? Stay tuned to B&B and don’t forget to check CDL often for the latest Bold and the Beautiful spoilers, updates, and news.