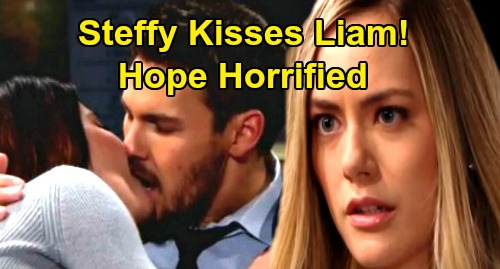 The Bold and the Beautiful (B&B) spoilers tease that Thomas Forrester (Matthew Atkinson) will realize his best shot at breaking up Liam Spencer (Scott Clifton) and Hope Logan (Annika Noelle) isn’t his current pawn. Thomas has been reeling Zoe Buckingham (Kiara Barnes) in, but convincing Hope he’s no longer obsessed is only half the battle. Thomas pretending to be into Zoe doesn’t change the fact that Hope’s with Liam.

After Thomas and Liam’s war revs up, it’ll make them both even more determined to take each other down. Liam will propose to Hope with one shocking condition – a stipulation that likely involves pushing Thomas out of the picture somehow. The Bold and the Beautiful spoilers say Thomas will fume over the news, so he’ll decide it’s time to play dirtier than usual.

Thomas will settle on Steffy Forrester (Jacqueline MacInnes Wood) as the one woman he can count on to lead Liam astray. Everyone knows Liam struggles with commitment, and Steffy’s always going to be somebody he’s closely connected to. That’s both due to their history as well as their daughter, Kelly Spencer (Zoe Pennington).

When Thomas envisions the future, he sees himself with Hope and Liam happily reunited with Steffy. Of course, Thomas couldn’t care less about Liam’s bliss. He just wants Liam focused on someone besides Hope. If it brings Steffy some happiness and puts her family back together, those are bonuses in Thomas’ eyes.

That’s why Thomas will rev up his efforts to make this “Steam” reunion happen. He’ll know that even if he fails, there’s a good chance he can plant some doubts about Liam’s loyalty to Hope. Thomas will be desperate for any kind of setback since Liam will be popping the question and working against him.

B&B spoilers say Thomas will rely on some manipulation to make Steffy do what he wants. He’ll convince Steffy to make her move with Liam, but what does that mean exactly? It doesn’t seem like enough for Steffy to just pour her heart out. That wouldn’t really be much of a “move.” Instead, it appears this will be something physical between them that Hope can witness.

Hope will end up distraught soon after Thomas pulls off his plan. Will Steffy plant a kiss just before Thomas sends Hope in? That seems reasonable under the circumstances. Liam certainly isn’t hopping back in bed with Steffy just yet, but a lip lock that Steffy initiates sounds about right.