BY Heather Hughes on December 31, 2019 | Comments: one comment
Related : Soap Opera, Spoiler, Television, The Bold and the Beautiful 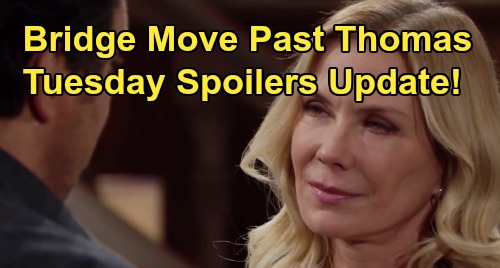 The Bold and the Beautiful (B&B) spoilers update for Tuesday, December 31, teases that some sneaky moves are on the way. First, we should point out that Tuesday’s episode will air as usual on the east coast, but those on the west coast will see The Sun Bowl instead. Then on Wednesday, January 1, east coasters will see a repeat episode while the west coast sees Tuesday’s east coast show.

In other words, no episodes will be skipped. You’ll just be watching the episode on Tuesday or Wednesday depending on what time zone you live in. Now that we’re clear on the CBS soap’s schedule, let’s get to all the action happening on B&B. The Bold and the Beautiful spoilers say Thomas Forrester (Matthew Atkinson) will feel confident in his plan. He just took Zoe Buckingham (Kiara Barnes) upstairs to make love, so Zoe will be on cloud nine when they wake up together later.

Hope Logan (Annika Noelle) will remain in Thomas’ heart and mind, but he won’t want Zoe to know that. Instead, Thomas will gush over Zoe and give her all the attention she craves. They’ll cuddle in bed together before Thomas invites Zoe to the Forresters’ Christmas gathering. He’ll think going to a family event together will convince everyone he’s moved on and no longer fixated on Hope.

Naturally, Liam Spencer (Scott Clifton) will continue to have his doubts about that. He doesn’t trust Thomas, so he feels he has no choice but to stay on guard. Now that Zoe’s made love to Thomas, she’s not going to be of much help to Liam and Steffy Forrester (Jacqueline MacInnes Wood). Zoe will put total faith in Thomas and the changes she believes she’s seen. That’ll force Liam to pursue some other strategies in the coming weeks.

In the meantime, Brooke Forrester (Katherine Kelly Lang) and Ridge Forrester (Thorsten Kaye) will consider their past. They’ll do some reminiscing and try to cling to the love that binds them. There’s a lot of history between these two, so calling it quits hasn’t been an easy task.

Ridge will tell Brooke that he hasn’t filed the divorce papers yet. He’ll ultimately ask Brooke to attend the Forrester family Christmas dinner, so it’ll serve as a sign of hope this holiday season. Of course, Brooke and Ridge still won’t agree on Thomas, but that feud will be put on hold for a bit. They can at least come together for a nice Christmas with the fam before they decide anything for sure.