The Bold and the Beautiful Spoilers: Hope Loses Liam to Steffy & Thomas to Zoe – Winds Up Alone and Unhappy

BY hellodrdavis on December 30, 2019 | Comments: 2 comments
Related : Soap Opera, Spoiler, Television, The Bold and the Beautiful 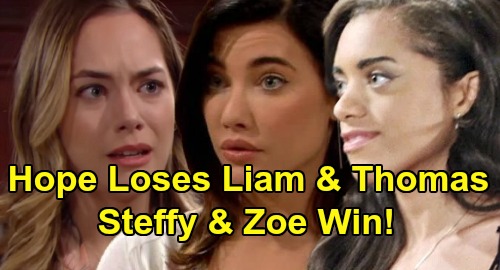 The Bold and the Beautiful (B&B) spoilers tease that Hope Logan (Annika Noelle) could soon be alone and unhappy. As B&B viewers know, she’s currently in a relationship with Liam Spencer (Scott Clifton) and the two seem happy enough, but lately there has been a third person in their marriage…Thomas Forrester (Matthew Atkinson). By adopting Douglas Forrester (Henry Joseph Samiri), Hope made Thomas a permanent part of her life, and that doesn’t sit well with Liam.

In fact, Liam wasn’t that enthused about adopting Douglas in the first place. He loves that little boy, so that’s not the issue, but he felt that he was already stretched pretty thin as it was between his daughters Kelly Spencer (Zoe Pennington) and Beth Spencer (River Davidson and Madeline Valdez). Still, Hope wanted Douglas and she was ultimately successful in adopting him, despite what Liam preferred.

One wonders if this will put a strain on Liam and Hope’s relationship going forward. According to B&B spoilers, Liam will soon propose to Hope, but he’ll do so with a major stipulation. Exactly what that stipulation will be remains to be seen, but it will probably have something to do with keeping Thomas away from her and the rest of his family.

Well, according to The Bold and the Beautiful spoilers, Hope will soon find herself frustrated with her relationship with Liam for her own reasons. She’ll feel like she’s sharing Liam with Steffy Forrester (Jacqueline MacInnes Wood), and she won’t like it. That could lead to even more tension between Hope and Liam, and we all know what Liam does when he’s experiencing problems with Hope…he tends to gravitate back to Steffy.

And one might expect that this would leave Hope wide open for Thomas to make his big move on Hope. And that’s certainly Thomas’ big plan, at least at the moment. But according to B&B 2020 spoilers, something interesting may soon be happening with Thomas. He’s currently faking a romance with Zoe Buckingham (Kiara Barnes) in order to convince Hope that he’s moved on, but over time it seems that he and Zoe might genuinely become close.

And if that happens, then he and Zoe could actually become a real couple over time. And if “Zomas” become an actual item, and Liam and Steffy gravitate back toward each other, where will that leave Hope? Through her own doing, she could end up losing Liam as “Steam” get back together as well as losing Thomas’ attention. And that would leave Hope with no man and no one pursuing her.

That would certainly be a big turnaround for Hope in 2020. She could lose both Liam and Thomas, not to mention the very real possibility that she could lose Hope For The Future in the fashion showdown. What do you think? Will it be a year of losses for Hope? Stay tuned to B&B and don’t forget to check CDL often for the latest Bold and the Beautiful spoilers, updates, and news.