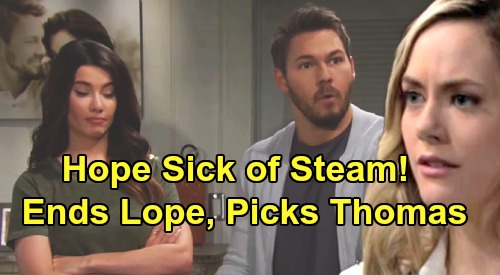 The Bold and the Beautiful (B&B) spoilers tease that Hope Logan (Annika Noelle) will begin to worry about her future with Liam Spencer (Scott Clifton). Liam’s set to pop the question, but it’ll come with a stipulation attached. That certainly seems like a hint about “Lope’s” looming downfall. B&B’s already setting up more complications between them.

Liam’s all about protecting Hope right now, but he’s teaming up with Steffy Forrester (Jacqueline MacInnes Wood) on his big plan. In addition to their secret alliance, Liam and Steffy are co-parents to Kelly Spencer (Zoe Pennington) and happen to be good friends. There’s going to be a strong bond between them forever – and that’s something that’ll trouble Hope in the new year.

As Liam and Steffy’s connection grows even stronger, Hope will become jealous and irritated. The Bold and the Beautiful spoilers say 2020 will definitely bring some conflict. Hope will feel like she’s always going to have to share Liam – which would be OK if that just meant sharing him as a dad. It’s Liam’s history of waffling that’ll be the real problem here. Hope won’t be able to fully trust Liam once he’s too close to Steffy.

Meanwhile, Thomas Forrester (Matthew Atkinson) will realize he needs to throw in the towel. Although he’ll still want a future with Hope, Thomas will start to believe it’s just not going to happen. As a result, Thomas will fully commit to his new relationship with Zoe Buckingham (Kiara Barnes). He’ll hope he can keep developing their spark and put Hope behind him.

Of course, that’s exactly when Hope may start considering Thomas! He repeatedly brought up how he could be devoted to Hope in ways that Liam couldn’t. Once Liam seemingly begins falling for Steffy again, Hope will wonder if she can keep doing this. She’ll also have to wonder if she might be better off with someone like Thomas – someone who wants her and her alone.

However, Thomas’ new attitude and improvements could change things. He was previously a one-woman man, but now there’ll be two fighting for that top spot in his heart. Even so, it’s difficult to believe Thomas would reject Hope – particularly when she’s Douglas Forrester’s (Henry Joseph Samiri) legal mom and giving his son a proper family is what Thomas has always wanted.

If Hope shows signs that she’s interested in Thomas after all, Zoe could end up dumped and devastated. Thomas’ devotion will become awfully appealing to Hope, so The Bold and the Beautiful spoilers say love will be tricky territory in the new year. We’ll give you updates as other B&B news comes in. Stay tuned to the CBS soap and don’t forget to check CDL often for the latest Bold and the Beautiful spoilers, updates and news.