The Bold and the Beautiful Spoilers: Liam Proposes to Hope, But There’s a Catch – Startling Stipulation or Wedding Canceled 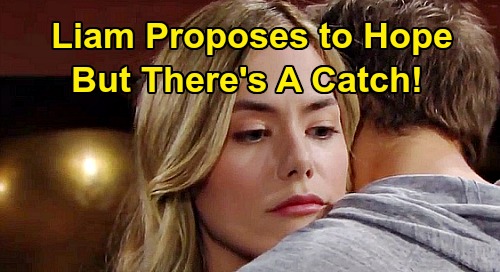 The Bold and the Beautiful (B&B) spoilers tease that Hope Logan (Annika Noelle) will get a big surprise. B&B fans know Hope and Liam Spencer (Scott Clifton) were ripped apart by the baby swap lie. They believed their beloved daughter, Beth Spencer (River Davidson and Madeline Valdez), was dead and that took a toll on their relationship. Hope pushed Liam away, which led to heartbreak and divorce.

However, elation followed after Liam and Hope were reunited with Beth. They ultimately got back together, but what about the whole marriage situation? Are they ever going to remedy that? Liam will intend to, but there’ll be a catch. During the week of January 6-10, Liam will decide to pop the question. Unfortunately, this may not be the romantic proposal Hope has in mind.

The Bold and the Beautiful spoilers say Liam will indeed propose, but he’ll also make a startling demand. There’ll be a condition that comes with this proposal – and it sounds like it may be non-negotiable. There’s no word yet on what all this means exactly, but it makes Liam sound awfully controlling.

Either Liam wants to marry Hope or he doesn’t! Putting a stipulation on the marriage offer makes it seem like some sort of transaction. After all, most gals out there want to be swept off their feet. No one wants to hear someone say “I’ll marry you, IF…”

Liam always rants about Thomas Forrester’s (Matthew Atkinson) obsession with Hope, but he’s seemingly become a bit obsessed with Thomas lately. There’s a good chance Liam’s condition will be related to Thomas. It may have something to do with Hope ditching their partnership at Forrester Creations.

If this Bold and the Beautiful fashion showdown goes well, you can bet Thomas will push for more. Liam isn’t going to like that, so he might hope this proposal will serve as a bribe. Of course, it’s possible Liam’s stipulation will be something innocent, but the wording of this spoiler makes it sound harsh and annoying. Why can’t Liam just ask Hope to marry him and let that be the end of it? If Liam’s in love, shouldn’t that be enough?

Perhaps that’s the point as we head into the new year. Another “Lope” wedding may not happen, so this could be the first sign of trouble. Liam will continue to inch in Steffy Forrester’s (Jacqueline MacInnes Wood) direction as 2020 kicks off, so stay tuned. We’ll give you updates as other B&B news comes in. Stick with the CBS soap and don’t forget to check CDL often for the latest Bold and the Beautiful spoilers, updates and news.