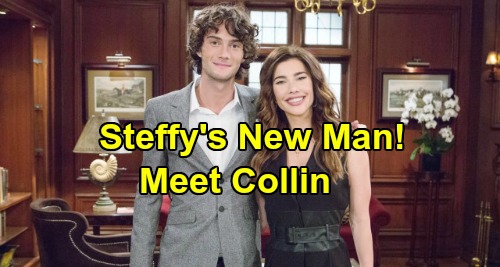 The Bold and the Beautiful (B&B) spoilers has some exciting news to pass on about an addition to the B&B cast, and a potential new love interest for Steffy Forrester (Jacqueline MacInnes Wood). B&B viewers have been clamoring for a new man for Steffy for months, and it looks like finally Steffy have someone interested in her very soon…and it’s a totally new character and not a Spencer man!

As B&B viewers know, Steffy has long been involved in a love triangle with Liam Spencer (Scott Clifton) and Hope Logan (Annika Noelle). And even though Liam seems to be firm in his choice of Hope at this point, there are still forces pushing for Steffy to be with Liam. Right now, Steffy’s brother Thomas Forrester (Matthew Atkinson) is gunning for Steffy to get back with Liam, so he can have Hope for himself. And according to B&B spoilers, he’ll soon be manipulating Steffy to go after Liam again.

But whether Steffy falls for Thomas’ manipulation remains to be seen. And besides, there are plenty of B&B viewers who would absolutely love to see Steffy with someone completely new – that is, not a Spencer man. Steffy has been with Liam, Wyatt Spencer (Darin Brooks), and of course she had an affair with Bill Spencer (Don Diamont). Fans are ready for Steffy to have a hot, independent romance.

Well, it seems that she could be on that path soon, as a newcomer to Forrester Creations – who happens to be a hot guy – will become interested in Steffy. His name will be “Collin” and he’ll be portrayed by fashion model Oli Green. He’s currently scheduled to appear on Friday, January 3, and from the looks of the promo pics, he and Steffy will interact at Forrester Creations.

According to The Bold and the Beautiful spoilers, Collin will take an immediate interest in Steffy, and he’ll flirt with her and ask her out. That’s a good sign that he’s a strong, straightforward character with plenty of drive, which is exactly what someone like Steffy needs. Steffy will reportedly be flattered by Collin’s interest in her, but will she accept his offer to go out on a date?

It would sure be great to see Steffy go out and have some fun with a hot guy after everything she’s been through, and it would be super fun to see Liam’s reaction to the development. Of course, if Collin is a full Forrester employee, then Steffy might hesitate to date him, since she’d be his boss.

But if he turns out to be someone like a buyer, who’s on similar footing to Steffy, then we definitely think she should take the plunge! Do you hope Steffy will say yes to Collin? Stay tuned to B&B and don’t forget to check CDL often for the latest Bold and the Beautiful spoilers, updates, and news.