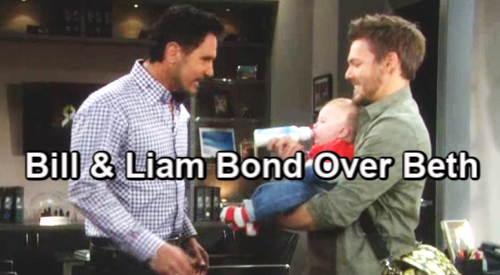 The Bold and the Beautiful spoilers tease that Liam Spencer (Scott Clifton) will have his share of heartwarming moments coming up. As B&B viewers know, he already had an emotional moment with his daughter Beth Spencer (River Davidson and Madeline Valdez), when he at once realized that she was his. But more touching moments are coming, as soon both he and Hope Forrester (Annika Noelle) will be jointly reunited with their daughter.

But for Liam, things will be complicated. It won’t be all joy and happiness going forward. He’s going to have some seriously mixed feelings where Steffy Forrester (Jacqueline MacInnes Wood) is concerned.

As B&B viewers know, Steffy has been under the impression for months now that Beth was her daughter. Known as “Phoebe Forrester,” Beth has been an integral part of Steffy’s life, and Steffy loves Beth as if she’s her own child.

Liam feels absolutely terrible for Steffy, and the situation going forward is going to be heart wrenching. Hope wants her baby back and Steffy’s coming to grips with the fact that her daughter isn’t really her daughter. And Liam’s smack dab in the middle. He’ll be experiencing a range of emotions, and he’ll likely need some serious emotional support.

Well, according to B&B spoilers, Liam will get some support from an interesting person…his father, Bill Spencer (Don Diamont). Of course, Bill and Liam have had a very troubled relationship over the past year-and-a-half, but they’ve recently started to rebuild their father-son bond. As B&B viewers will remember, Bill and Katie Logan (Heather Tom) recently came to visit Steffy and Liam, and the two men seemed to put their past behind them.

And that’s a good thing, because it looks like Liam’s going to need his dad’s support now. B&B spoilers say that Liam and Bill will soon share a heartwarming moment, which will likely be related to the revelation that Beth is alive. Bill will probably want to see the baby that he now knows is his granddaughter, and by all accounts he and Liam will have a touching moment together.

Will Liam Spencer Open Up To His Father For Advice?

Remember that Bill was present on Catalina Island shortly after Beth’s alleged death, and he knows how difficult that was for Liam. He’ll be thrilled for his son, now that it’s been revealed that Beth is alive, but he also may want to offer some words of encouragement, since it’s pretty clear that Liam will soon be part of a baby hand-off that will be absolutely devastating for one of the women that he loves.

It should be interesting to watch Bill’s interaction with Liam. Hopefully, Liam will be open to his father’s love and even to his advice as he must deal with a delicate situation going forward. Bill will certainly be a very proud grandpa who’s absolutely elated to find out that his granddaughter survived.

Are you looking forward to watching the touching Bill/Liam scenes coming up? Stay tuned to the CBS soap and don’t forget to check CDL often for the latest Bold and the Beautiful spoilers, updates, and news.