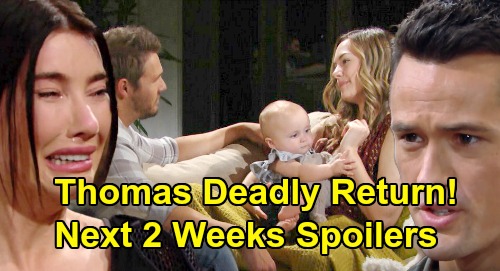 The Bold and the Beautiful (B&B) spoilers for the next two weeks tease that some hot drama’s coming up. First, during the week of August 12-16 Steffy Forrester (Jacqueline MacInnes Wood) will deal with the deep sadness of watching Beth Spencer (River Davidson and Madeline Valdez) leave with Hope Forrester (Annika Noelle). She’ll accept that this is the way it has to be, but it’ll still be excruciating.

Despite Liam Spencer’s (Scott Clifton) sympathy for Steffy, he’ll manage to enjoy some bliss with Hope later. She’ll insist she never stopped loving Liam, so he may echo the idea. The Bold and the Beautiful spoilers say Hope and Liam will come together with Beth for even more precious family moments. They’ll savor each one now that they finally know Beth is alive and well.

Over with Ridge Forrester (Thorsten Kaye) and Brooke Forrester (Katherine Kelly Lang), they’ll clash over their daughters. Ridge’s support of Steffy will irk Brooke, who’ll feel like Ridge isn’t really grasping the situation. Brooke will maintain that Hope deserves to be with her daughter, but Ridge will remain worried about Steffy’s fragile state.

Other B&B spoilers say some cute Logan family scenes are coming up. Beth will get a warm welcome now that they know she’s a Logan through Hope and not Florence “Flo” Fulton (Katrina Bowden). That calls for a celebration since Hope’s been so distraught. Beth will bond with the Logan women as Hope remains on cloud nine.

Some moving scenes are on the way for Liam and Bill Spencer (Don Diamont) as well. Bill will hold his granddaughter and express his joy for Liam. He’ll be thankful that the truth finally came out, even though it makes things complicated with Steffy. The most important thing to Bill will be Liam having his youngest daughter back. It looks like the Spencer men will do some nice bonding in these upcoming episodes.

Elsewhere, Thomas Forrester (Matthew Atkinson) will give himself a pep talk. He’ll be in a dark place as he hides out with his pal, Vincent Walker (Joe LoCicero). Vinnie will be happy to help Thomas out for a while, but Thomas will think he needs a better solution. He’ll ultimately convince himself that Hope’s heart can be won, so he’ll start plotting ways to make it happen.

Next, it’ll be Xander Avant’s (Adain Bradley) turn to join the backlash party. He’ll get an earful for his role in the baby swap cover-up, but Zoe Buckingham (Kiara Barnes) may rush to his defense. Xander wanted to come clean and even left town since he was so disgusted. Nevertheless, Ridge and Brooke will feel like Xander should’ve done something. Guilt and disgust mean nothing without action.

At the cabin, a heated showdown is on the way. The Bold and the Beautiful spoilers say Flo and Shauna Fulton (Denise Richards) will sneak over there to talk to Hope. They’ll want to explain themselves and try to make amends, but this plan will be a disaster. While Hope blasts Flo, Shauna will get ripped into by Brooke, Katie Logan (Heather Tom) and Donna Logan (Jennifer Gareis).

The week of August 19-23 will bring major consequences for Flo. Ridge will make it clear that he meant it when he said Flo would pay. He’ll horrify Shauna by taking the next step, so it sounds like Flo’s arrest is looming. The Bold and the Beautiful spoilers say Flo will have to face the reality of the pain she inflicted.

Finally, Thomas will make a dangerous decision. He’ll mull it over and determine there’s only one path to happiness. Thomas will feel like he has to get Liam away from Hope, but the only strategy he sees could be deadly! Will Thomas snatch Hope and plot Liam’s murder? Nobody will be surprised when Thomas’ behavior once again goes dark.