The Bold and the Beautiful Spoilers: Bradley Bell Teases Next Gruesome Death – Unlucky B&B Character Follows Emma to the Grave 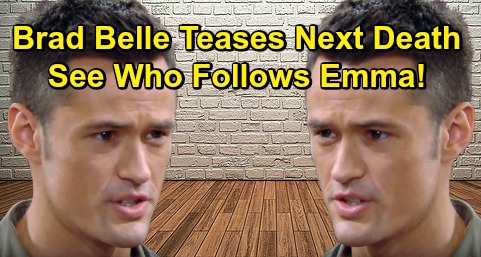 The Bold and the Beautiful (B&B) spoilers reveal that the grim reaper may once again visit the CBS soap. Emma Barber (Nia Sioux) faced a shocking death, but she may not be the only character killed off. In a recent issue of Soap Opera Digest, Executive Producer and Head Writer Bradley Bell hinted that this summer could bring other fatalities.

“People are on pins and needles down onstage because you have sharks swimming in the waters,” Bell admitted. “You never quite know who will be his next prey.” “His” meaning Thomas Forrester’s (Matthew Atkinson)! Bell acknowledged the recent victim and insisted that “more tragedies could certainly follow.”

It’d be a bad idea for Bell to get people hyped up over another death or even multiple deaths only to let them down. Based on that B&B hint, we can probably assume Bell will come through on at least one more demise.

Xander Avant (Adain Bradley) still seems like a good option since he’s fired up over Emma’s passing and is quick to smart off to Thomas. He may go one step too far and wind up a goner.

Of course, Bell’s comments also provided some clarity on Thomas. Just in case there was in any doubt in your mind, Bell confirmed that Thomas is indeed the baddie in this story. A few fans out there tried to defend Thomas in the aftermath of Emma’s crash.

Bell advised against shipping “Thope” as well. “Our heroine is in the clutches of our villain and as much as we may think Douglas needs a mother, which he does, and Thomas needs someone to love, there is no rooting interest in them,” Bell said.

Some fans may object to Thomas suddenly turning to the dark side, but Bell suggested that he tried to make it happen as slowly as he could. He brought Thomas in after the loss of Caroline Spencer (Linsey Godfrey) and went from there.

However, all Bell hears from fans is that they want resolution now. He’s trying to give the people what they want by speeding the process along. That means this Bold and the Beautiful story will heat up fast. Another death may be just around the corner as we build toward the big Beth Spencer reveal, which seems poised to happen before summer concludes.