BY hellodrdavis on June 26, 2019 | Comments: one comment
Related : Soap Opera, Spoiler, Television, The Bold and the Beautiful 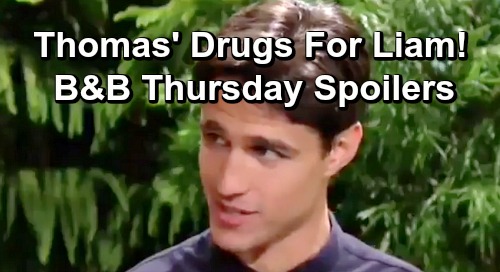 The Bold and the Beautiful spoilers for Thursday, June 27, tease that Thomas Forrester (Matthew Atkinson) will continue his scheming. You’d think that he might slow down a bit and keep a low profile after heavily contributing to Emma Barber’s (Nia Sioux) tragic death, but it looks like he’ll be up to his old tricks soon enough.

According to B&B spoilers, Thomas will decide that he needs some help in his plot to woo Hope Logan (Annika Noelle) and drive a further wedge between Hope and Liam Spencer (Scott Clifton). Thomas succeeded in getting Hope to annul her marriage to Liam, but he’s still got a problem, as Hope keeps pining over Liam.

She’s told Thomas that she’s willing to consider a future with him and Douglas Forrester (Henry Joseph Samiri), but she needs to take it slowly.

Unfortunately, taking it slowly isn’t really Thomas’ style. He wants Hope and he wants her now, and on Thursday’s episode of B&B, he’ll decide that he needs some help in pushing Hope along and getting her to move on from Liam. So, he’ll turn to a friend of his for help. Look for Thomas’ pal Vincent Walker (Joe LoCicero) to make an appearance to help his old buddy out.

As it will turn out, Vincent will provide Thomas with something that he hopes will help him convince Hope to move on from Liam…illegal drugs. B&B spoilers indicate that Liam will soon be drugged outside of his awareness, so it certainly looks like Thomas plans to drug Liam to manipulate him into getting closer to Steffy Forrester (Jacqueline MacInnes Wood). We’ll have to tune in to Thursday’s episode to see how this all plays out.

Meanwhile, on the new episode of B&B on Thursday, June 27, Hope will have a difficult discussion with Brooke Forrester (Katherine Kelly Lang) and Ridge Forrester (Thorsten Kaye). According to B&B spoilers, Hope will find herself in the middle as Brooke and Ridge take opposing viewpoints about her immediate future.

This will no doubt have to do with Hope’s relationship with Thomas, since Brooke and Ridge haven’t been seeing eye-to-eye where he is concerned. Of course, Brooke feels like Thomas’ aggressive pursuit of Hope is suspect, and Ridge feels that Hope and Thomas seem to be well-suited for each other.

It should be an uncomfortable discussion for Hope, as Brooke and Ridge openly discuss her future. She won’t want to see her mother’s marriage affected by something that’s really her own business, but it seems that both Brooke and Ridge will let their opinions be known…as usual.