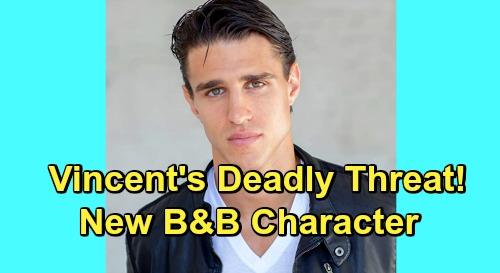 The Bold and the Beautiful (B&B) spoilers tease that a new character is headed to the CBS soap. It turns out this hunk’s got several B&B connections. According to People, Joe LoCicero is set to play Vincent Walker in two upcoming episodes. Vincent happens to be a “nefarious colleague” of Thomas Forrester’s (Matthew Atkinson), so that’s connection number one.

There’s also a real-life connection since LoCicero is married to Gina Rodriguez. Longtime B&B viewers will recall that Rodriguez played Beverly on The Bold and the Beautiful from 2011-2012. She later went on to star in several films and primetime shows, including portraying the titular character on Jane the Virgin – which is currently finishing up its final season on The CW.

There’s even a third connection since Justin Baldoni starred as Graham Barros on B&B in 2010 and now stars on Jane the Virgin along with Rodriguez. As for LoCicero, he played a stripper who inadvertently caused trouble for Jane. LoCicero’s character on The Bold and the Beautiful will cause trouble as well, but it’ll certainly be intentional! It sounds like Vincent could target Thomas in a big way.

The Bold and the Beautiful spoilers LoCicero will debut as Vincent on June 27. He’ll also pop up on July 2, but there’s a chance he’ll have more appearances later. Then again, there’s no guarantee Vincent will make it out alive! If he learns the Beth Spencer secret and tries to blackmail Thomas with it, who knows what might happen?

The fact that Vincent is said to be nefarious could mean bad news for Thomas. That could ultimately mean bad news for Vincent, too. The Bold and the Beautiful spoilers say Thomas will take some dark turns over the summer, so he could play a role in the deadly drama to come.

However, most B&B fans hope the promised demise is someone who’s already deeply entrenched in the story. It wouldn’t be very satisfying if it was a newbie, but Vincent could still play a role in spinning things out of control for Thomas. Whatever the case, it’ll be fun to have a little more eye candy and see what problems Vincent can create.

Are you eager to see who dies this summer on B&B? We’ll give you updates as other details emerge. Stay tuned to the CBS soap and don’t forget to check CDL often for the latest Bold and the Beautiful spoilers, updates and news.