BY hellodrdavis on October 7, 2019 | Comments: one comment
Related : Soap Opera, Spoiler, Television, The Bold and the Beautiful 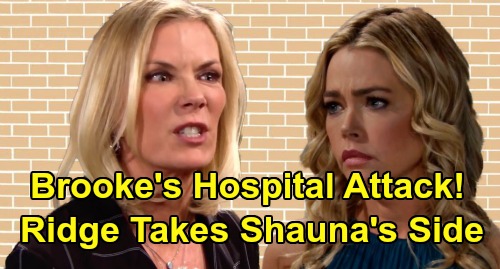 The Bold and the Beautiful spoilers tease that Ridge Forrester (Thorsten Kaye) will soon witness an explosive scene. As B&B viewers know, he’s currently separated from Brooke Forrester (Katherine Kelly Lang), and it’s partially thanks to the evening he spent with Shauna Fulton (Denise Richards). When Brooke found out about Ridge spending the night alone with Shauna, she blew a fuse, and Ridge got an earful, as did Shauna later.

In fact, Brooke totally let Shauna have it at her apartment, complete with some serious name-calling and a major slap across the face. But to her credit, Shauna gave as good as she got and fired right back at Brooke. That provocation ultimately caused Brooke to start throwing things, and she wound up breaking some knick-knack that Shauna and Flo Fulton (Katrina Bowden) had sitting around the apartment. It was out of control.

Well, it seems that Brooke won’t be done ranting and raving at Shauna by any means. According to The Bold and the Beautiful spoilers, she’ll again go off on Shauna, and it looks like this episode might take place at the hospital. Shauna has just suggested to Flo that she get tested to be a potential kidney donor to Katie Logan (Heather Tom), and B&B spoilers say that Flo will indeed be a match for Katie, so she and Shauna will soon be at the hospital in close quarters with Katie and her family…including Brooke.

Exactly how it goes down remains to be seen, but it’s likely that Shauna will bump into Brooke at the hospital during or after Katie’s and Flo’s respective surgeries. It may not be known to Brooke at the time that Flo is Katie’s kidney donor, since Flo will want to keep her donor status anonymous. And so Brooke will probably be livid to see Shauna hanging around the hospital, and she might even think that Shauna’s there to see Ridge.

At any rate, Brooke will blast Shauna during their encounter, and it looks like it will be a very public scene. Brooke really seems to lose control pretty easily these days – after all, she’s now slapped both Shauna and Thomas Forrester (Matthew Atkinson), indicating that she’s really reaching her limits. Well, it should be a pretty bad scene between her and Shauna, and it seems that Ridge will witness the whole thing.

According to B&B spoilers, there will then be a major “Bridge” blowup after Ridge sees Brooke go off on Shauna. Ridge will probably be horrified to see Brooke ranting and raving at Shauna, and he’ll apparently let Brooke know how he feels about the whole thing. It will be yet another “Bridge” argument, which certainly isn’t going to help them to get back together or work through their differences anytime soon.

One wonders whether Brooke and Ridge are ever going to get through all of this turmoil, and whether Brooke’s harsh treatment of Shauna will result in Ridge stepping and defending Shauna, which is something that would drive an ever further wedge between him and Brooke. Do you think that Ridge will end up defending Shauna from Brooke’s attacks? Stay tuned to the CBS soap and don’t forget to check CDL often for the latest Bold and the Beautiful spoilers, updates, and news.