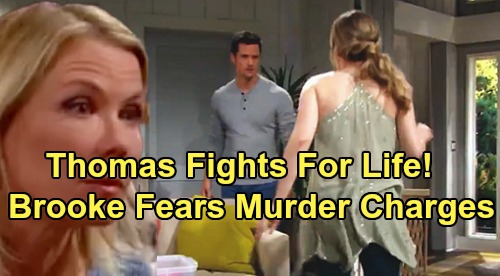 The Bold and the Beautiful (B&B) spoilers tease that Thomas Forrester (Matthew Atkinson) will be in bad shape at the hospital. Brooke Forrester’s (Katherine Kelly Lang) split-second decision will leave Thomas fighting for his life.

Of course, Brooke will face a nightmare of her own! Ridge Forrester (Thorsten Kaye) will be livid with his wife for what he perceives to be a cold-blooded murder attempt.

Brooke will maintain he innocence – at least when it comes to motive. There’ll be no denying her role in Thomas’ dire predicament, but Brooke will assure Ridge the force was necessary. She’ll want Ridge to understand that Hope Logan’s (Annika Noelle) safety had to be the priority.

Brooke Forrester Will Be Shocked By Her Husbands Accusations

Ridge may ask why Thomas’ safety has to be sacrificed. He’ll undoubtedly argue there had to be a better way than trying to kill his son. The Bold and the Beautiful spoilers say Brooke will be taken aback by Ridge’s rage and accusations. She may be offended that Ridge would think the worst of her. At the same time, the parent in Brooke may get that Ridge is terrified of losing his son.

Even so, Brooke will stand by her shocking move and accept the outcome it led to. She won’t want Thomas to die, but she’ll have to prepare for the possibility that he might. The same goes for the rest of the Logans along with the Forresters and Spencers. The Bold and the Beautiful spoilers say there’ll be plenty of worries as Thomas is given a grim prognosis.

Dr. Jordan Armstrong (Vincent Irizarry) will probably admit they’ll just have to wait and see. Thomas will be treated for his injuries, but there’s only so much his medical team can do.

It’ll be up to Thomas to fight and pull through. Brooke will hope that happens for a couple reasons. One is she won’t want to be the reason Ridge loses his child. Another is that Brooke will want to avoid deadly charges.

Detective Alex Sanchez (Jeremy Ray Valdez) will grill Brooke during the week of August 26-30. It looks like he’ll have doubts about the accuracy of Brooke’s story. Brooke may fear that she’ll go down for murder if Thomas doesn’t wake up. B&B fans can definitely expect some scary moments all around.