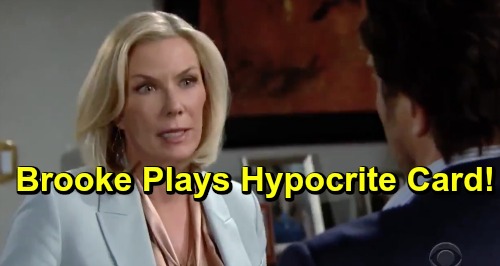 The Bold and the Beautiful spoilers tease that Brooke (Katherine Kelly Lang) will play a fully hypocritical card, seeing everything that Taylor (Hunter Tylo) is doing as wrong, when in fact the good doctor is simply looking out for her family’s best interests.

What would be wrong with Thomas (Matthew Atkinson) getting closer to Hope (Annika Noelle), especially considering how Douglas (Henry Joseph Samiri) feels about his new mommy? Actually nothing, if one follows Brooke’s well established relationship rules.

But Ridge’s (Thorsten Kaye) current wife is incensed that Taylor wants to see Steffy (Jacqueline MacInnes Wood) and Liam (Scott Clifton) reunite and raise their daughters. Few people know that Phoebe is Lope’s recently newborn daughter, as she is presumed dead. So, until that reveal happens, Taylor’s plan makes sense.

Steffy is raising Kelly (Zoe Pennington) on her own after making an unbelievably generous decision last year, when she told Liam to make Hope his wife, which he then did. Along with that fully selfless choice, Steffy opted to adopt the child Flo (Katrina Bowden) was unable to keep. Of course Reese (Wayne Brady) invented a terrible story in Phoebe’s regard in order to gain money, but again that reveal storyline is yet to be told.

Brooke surely wouldn’t like it that her name was skipped in the last two paragraphs, even though this feature isn’t intended as favorable toward her. She wants to be part of everything and to hold full sway where all aspects of her family’s lives are concerned.

Brooke has manipulated Ridge’s emotions, according to Taylor, thereby creating the latest version of Bridge. But she fails to recognize that Taylor is acting in a similar behalf where Steffy’s love life is concerned. Add in that Thomas and Hope have a history and the Tope plan is plausible, which Brooke senses, thus the intensity of her latest venomous response.

Surely the nature of opinions, meaning Brooke’s and Taylor’s, is totally subjective. Ridge is quite the fortunate guy to have two deeply accomplished and desirable ladies in love with him, though the root of their feelings has spurned emotional mortal combat that has been raging for years, including a recently glorious cake battle.

Brooke’s basic message is that Taylor should be deferential to her. In the past, she also threatened to report Taylor to the police for shooting Bill (Don Diamont), though he’s since inclined to not go along with that plan and has also since shifted his heart’s focus from Brooke to Katie (Heather Tom).

Deep credit goes to B&B for allowing Lang and Tylo to restore their character’s daytime rivalry. Both great actors continue to make this fierce fight unpredictable.