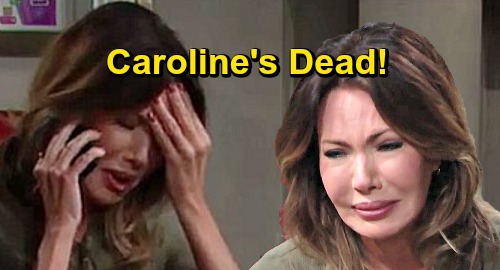 The Bold and the Beautiful (B&B) spoilers tease that a devastating death will shake things up. There’s no official confirmation on which character will be killed off, but all signs point to one person in particular. It seems likely that Caroline Spencer (Linsey Godfrey) will suffer a grim fate.

B&B doesn’t seem to have a place for Caroline anymore, especially now that Godfrey is playing Sarah Horton on Days of Our Lives. If they wanted to bring Caroline back on canvas, they’d have to recast. That wouldn’t be wise since they’re already bringing in a new Thomas Forrester (Matthew Atkinson). It’s tough enough for fans to get used to one new face, so two would be pushing it.

Of course, those possibilities are only on the table if Caroline is out of the picture. Since Thomas seems to be sticking around for a while, death is the only thing that makes sense. Thomas will have Douglas Forrester (Henry Joseph Samiri) with him, so it’s not like he can just keep the kid from his mother. Instead, Thomas will probably come home to grieve and get the support of his family.

The Bold and the Beautiful spoilers say Dr. Taylor Hayes (Hunter Tylo) will get a crushing phone call in Thursday’s episode. Bill Spencer (Don Diamont) will also face a crushing blow, which he’ll pass along to Katie Logan (Heather Tom). He’ll later feel guilty about the lie he told Thomas, which involved Caroling dying of a terminal illness.

If Caroline is dead for real, it’d be natural for Bill to battle guilt. It’s possible Caroline was actually diagnosed with a terminal illness later and kept quiet about it. That’d explain why Thomas abruptly reunited with her once more and why Sally will soon apologize for Thomas for their split.

However, it’s also possible Caroline died in some terrible accident. A car crash would be an easy explanation. Regardless, The Bold and the Beautiful spoilers say Caroline’s death would rock several characters to the core. If Caroline is indeed the one who bites the dust, it should deliver some gripping scenes.

Are you eager to see how the deadly drama plays out? We’ll give you updates as other B&B news comes in. Stay tuned to the CBS soap and don’t forget to check CDL often for the Bold and the Beautiful spoilers, updates, and news.