BY Heather Hughes on March 14, 2019 | Comments: one comment
Related : Soap Opera, Spoiler, Television, The Bold and the Beautiful 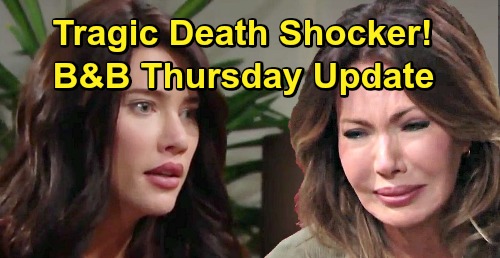 The Bold and the Beautiful (B&B) spoilers update for Thursday, March 14, tease that Dr. Taylor Hayes (Hunter Tylo) will put up a fight. She won’t be happy about Steffy Forrester’s (Jacqueline MacInnes Wood) plan to leave for Paris, so she’ll be sure to let her daughter know it. Taylor will argue that Steffy needs to stay in Los Angeles with the girls and focus on reuniting with Liam Spencer (Scott Clifton).

Steffy will once again shut down that idea and contend that Hope Spencer (Annika Noelle) needs Liam more. She won’t want to get in the way as Hope and Liam try to heal their grief-stricken marriage. Beth Spencer’s “death” has been the hardest thing Hope’s ever had to go through. Liam doesn’t need to abandon Hope at a time like this, so Steffy’s taking herself out of the picture entirely.

Taylor may gripe about Steffy taking Kelly Spencer (Zoe Pennington and Chloe Teperman) and “Phoebe Forrester” (Isabella de Armas and Redford Prindiville) out of the country, but Steffy reassure her mom. She’ll note that Liam can have a baby breather and Hope can break her “Phoebe” obsession. Steffy will insist this isn’t forever, so Liam will have a chance to bond with the girls when she gets back.

Taylor still won’t be pleased, but she’ll just have to get over it! Besides, their family will have far worse problems soon. Thursday’s B&B episode will bring a crushing phone call. Taylor will burst into tears after receiving it as Steffy stands there in shock. It looks like Caroline Spencer (Linsey Godfrey) has died, so that should be what sends Thomas Forrester (Matthew Atkinson) back to LA.

Meanwhile, The Bold and the Beautiful spoilers say Bill Spencer (Don Diamont) will enjoy a wonderful lunch with Katie Logan (Heather Tom). It’ll almost feel like old times as they laugh over their apparent matchmakers and the plot they cooked up. Katie and Bill will agree that Cupid’s trying a little too hard, but they’ll have to admit it’s pretty sweet.

Of course, that’ll spark a conversation about a “Batie” reunion. Bill and Katie will ultimately determine that they should just go with the flow. They won’t force a renewed romance, but they won’t hinder it from developing either. Alas, the warm mood will turn somber when Bill gets a horrible call of his own. It appears he’ll also get awful Caroline updates, so he’ll have cope with the loss.