BY hellodrdavis on March 13, 2019 | Comments: one comment
Related : Soap Opera, Spoiler, Television, The Bold and the Beautiful 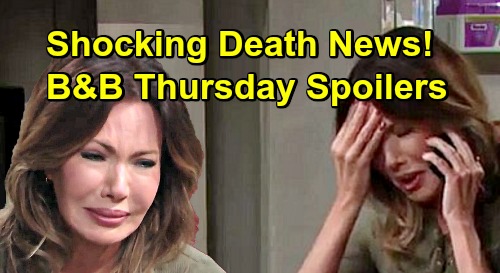 The Bold and the Beautiful spoilers for Thursday, March 14, tease that Steffy Forrester (Jacqueline MacInnes Wood) will have a difficult task ahead of her. Telling Hope Spencer (Annika Noelle) and Liam Spencer (Scott Clifton) that she was taking the girls and going to Paris was hard enough, but now she’ll be faced with telling her mother the news. Taylor Hayes (Hunter Tylo) is almost as obsessed with Steffy and Liam getting back together as Hope is these days, and so it looks like she won’t be too thrilled about Steffy’s plans.

Of course, Taylor only wants what’s best for Steffy, and to Taylor that means Steffy getting back together with Liam and raising the girls as a nuclear family. Taylor will be dismayed to hear that Steffy is doing something designed to strengthen Hope and Liam’s marriage, and B&B spoilers say that Taylor will balk at the idea. She’ll think that Steffy should be fighting to put her own family back together, not doing things that will benefit Hope and Liam’s marriage.

But Steffy will be determined to put herself and her girls first, and she’ll think that a temporary move to Paris with Kelly Spencer (Chloe Teperman and Zoe Pennington) and Phoebe Forrester (Isabella de Armas and Redford Prindiville) will do them all some good. Steffy has been very giving to Hope and Liam in their time of grief and has stood by while Hope grew a bit too close to Phoebe, but now she’ll want some bonding time with the girls all to herself.

As Steffy and Taylor are discussing the matter, something shocking will happen. Taylor will receive a call on her cell and get terrible news. She’ll immediately burst into tears as Steffy looks on, wondering what is going on.

B&B spoilers indicate that someone close to the family will have died, and that it will later be revealed that this person is Caroline Spencer (Linsey Godfrey). So it appears that the person calling Taylor will be Thomas Forrester (Matthew Atkinson), and that he’ll have the heart wrenching job of breaking the news of Caroline’s death to the family.

Meanwhile, on the new B&B episode on Thursday, March 14, Bill Spencer (Don Diamont) and Katie Logan (Heather Tom) will decide to enjoy lunch together at Il Giardino. The two appear to be the targets of a setup, as neither of their lunch dates managed to show up at the restaurant. Katie was supposed to meet Brooke Forrester (Katherine Kelly Lang) and Bill was supposed to meet the mayor.

As they sit and chat, Bill & Katie will realize that they’ve been set up by the matchmakers in their lives. Bill will figure that Justin Barber (Aaron D. Spears) is behind his supposed lunch date with the mayor, and Katie will figure that Donna Logan (Jennifer Gareis) must have put a reminder on her phone indicating that she was supposed to have lunch with Brooke.

It might be bit awkward for Bill and Katie, as they are forced to acknowledge to each other that there are matchmakers trying to get them together, and that Justin and Donna each think that they still have feelings for each other. The two will probably dance around the topic a bit, but it looks like they’ll thoroughly enjoy their time together. Unfortunately, at the end of Thursday’s episode Bill will receive a phone call and hear some really bad news!