The Bold and the Beautiful Spoilers: What Happens After Steffy’s B&B Exit – Preview of Baby Drama, Romantic Hurdles and More 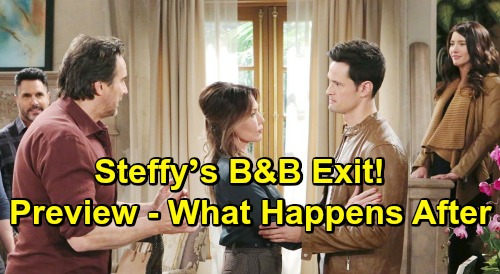 The Bold and the Beautiful (B&B) spoilers tease that Steffy Forrester (Jacqueline MacInnes Wood) will deliver the stunning news of her departure. She’ll tell Liam Spencer (Scott Clifton) and Hope Spencer (Annika Noelle) she’s leaving town with the girls, but they won’t be the only ones caught off guard. Steffy’s family will also be surprised by her abrupt decision to leave Los Angeles.

Nevertheless, Steffy will do her best to convince everyone this is the right call. She’ll have a chance to see Thomas Forrester (Matthew Atkinson) and Douglas Forrester (Henry Joseph Samiri) before he goes, so at least there’ll be a little family reunion. After that, Steffy will head to Paris and life in LA will have to carry on.

Jacqueline MacInnes Wood’s maternity leave is driving this exit, but what does Steffy’s extended trip mean for the show? Let’s consider what’ll happen in Steffy’s absence. Even without Steffy, “Phoebe Forrester” (Isabella de Armas and Redford Prindiville) and Kelly Spencer (Zoe Pennington and Chloe Teperman) around, there’ll be no shortage of B&B drama.

For starters, Thomas’ comeback will kick off a complex new chapter in his love life. He’ll interact with Sally Spectra (Courtney Hope), who’s currently in a relationship with Wyatt Spencer (Darin Brooks). Things are bound to get more complicated thanks to Florence “Flo” Fulton (Katrina Bowden) as well.

Wyatt told Sally she shouldn’t worry, but there’s always a reason to worry when a former flame’s around! On soaps, that usually spells disaster for a romance. Wyatt and Sally will face double trouble since they’ll both have exes around.

The Bold and the Beautiful spoilers say Flo’s mom, Shauna Fulton (Denise Richards), will show up in April. That should keep the baby plot moving along despite Steffy’s break. Liam and Hope will also have to find out if their marriage is strong enough to survive their loss. They’ll definitely deal with some struggles as they try to heal.

Of course, Bill Spencer (Don Diamont) and Katie Logan (Heather Tom) will remain matchmaking victims, but they won’t mind. The Bold and the Beautiful spoilers say Katie will fall for Bill all over again. It looks like they’ll decide to reunite, but some new “Batie” hurdles may hit when they least expect it.

The timing of Steffy’s departure isn’t ideal, but no one blames Wood for starting a family! She’ll be busy enjoying her newborn son for a while, so B&B fans can make do without Steffy onscreen. The chaos that happens without her should set up Steffy’s eventual comeback story, so it should still be fun to watch.