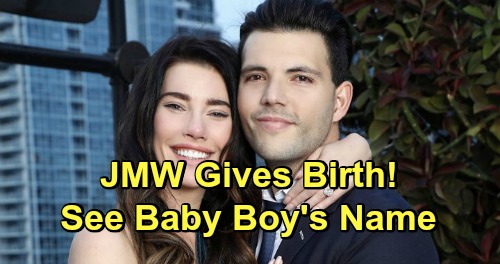 The Bold and the Beautiful (B&B) spoilers reveal that one CBS soap star has something to celebrate. B&B fans have been anxiously awaiting the birth of Jacqueline MacInnes Wood’s (Steffy Forrester) baby boy. Thanks to Wood’s Instagram hints, suspicions were swirling about her going into labor earlier this week.

Now Wood has confirmed her son’s birth to People with an announcement and some adorable pics. She also revealed the name of her new little one – and there’s an interesting meaning behind it. Rise Harlen Ruspoli was born on Monday, March 4. Wood settled on the name with her husband, Elan Ruspoli, with a goal in mind for their child.

“We chose Rise because to us Rise means growth, the simplicity of moving forward,” Wood said. “We look to our son as an uplifting force toward positive change and a better world.” It’s great that Rise has a unique name he can live up to as he grows up. His parents are certainly glad that he’s here! Wood is positively beaming in the new photos along with Rise’s proud papa.

Rise weighed in at 7 lbs., 13 oz., and he’s 21½ inches long. It looks like he’s happy and healthy, so Wood and Ruspoli couldn’t ask for a better outcome. This news comes just as Wood’s character is set to exit B&B. The Bold and the Beautiful spoilers say Steffy is headed to Paris with Kelly Spencer (Zoe Pennington and Chloe Teperman) and “Phoebe Forrester” (Isabella de Armas and Redford Prindiville).

While Wood’s on maternity leave, Steffy will remain off canvas with the girls to let Hope Spencer (Annika Noelle) and Liam Spencer (Scott Clifton) heal their marriage. Something tells us that plan won’t really pan out. Liam and Hope’s issues could actually get worse once there are no babies around to keep them busy. They’ll have to focus on working through their grief, which is sure to be a tough task.

The drama will heat up on The Bold and the Beautiful, but it’s nice to know Wood will be home enjoying her new bundle of joy. B&B should announce a return airdate down the road, so that’s something to look forward to. We’ll give you updates as other details emerge. Stick with the CBS soap and don’t forget to check CDL often for the latest Bold and the Beautiful spoilers, updates, and news.